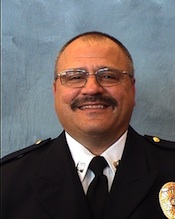 Participants in the FBI’s National Academy Program must be invited to attend. Less than one percent of law enforcement executives are chosen to participate.

Sheriff Smith said, “We are extremely proud to have an individual of John’s experience and caliber as part of our agency.  His completion of the FBI National Academy program is a significant accomplishment which will help us to continue to provide excellent service to the citizens of Larimer County.”

Captain Manago said, “I feel very fortunate to have had the opportunity to participate in this outstanding academy. Participating with other law enforcement professionals from around the world has given me a broader perspective which I believe will provide a good foundation for helping to prepare our agency for the strategic challenges ahead.”

Internationally known for its academic excellence, the National Academy Program offers 10 weeks of advanced investigative, management and fitness training for selected officers having proven records as professionals within their agencies. Training is provided by FBI Academy instructional staff, Special Agents and other staff members holding advanced degrees, many of who are recognized internationally in their fields of expertise. Classes are accredited through the University of Virginia and students are able to earn undergraduate and graduate credits for the classes.