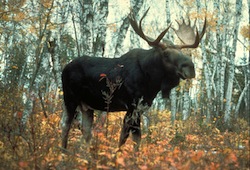 DENVER – In the wake of several people being injured by moose this year, Colorado Parks and Wildlife is reminding outdoor enthusiasts that moose can be aggressive when dogs and humans get too close. Since early spring, wildlife officers have responded to three human/moose conflicts, including two recent incidents in Grand Lake. In all three instances, dogs – both on and off-leash – reportedly spooked the moose before it charged and seriously injured the dog’s owner.

Moose in Colorado have very few natural predators and they are not generally frightened by humans. However, state wildlife officials caution that the large ungulates see dogs as a threat due to their similarities with wolves, their primary predator. Wildlife officials caution that dogs should never be allowed to approach a moose.  ”Almost all incidents with aggressive moose involve dogs getting too close to the animal,” said Lyle Sidener, area wildlife manager for Colorado Parks and Wildlife in Hot Sulphur Springs. ” In most cases, a  threatened moose will naturally react and try to stomp on the dog. The frightened dog will typically run back to its owner bringing an angry, thousand pound moose with it.”  Moose are one of the state’s most popular wildlife species and their numbers are growing. In 1978, the former Colorado Division of Wildlife transplanted 12 moose into the area around the town of Walden in North Park. After several more relocations across the western part of Colorado in the following years, their population is now estimated at over 2,000 animals.

As more people enjoy Colorado’s outdoors, wildlife officials remind the public that moose can be found in areas where they did not exist only a few years ago. They stress the importance of understanding moose behavior when living or recreating in areas where moose are now common.  Female moose – called cows – are very protective of their young, especially in the early summer months. Bulls will aggressively defend their territories from humans, dogs or other moose any time of year with increased aggression during mating season in late September.  The best practice for sharing space with moose is to give them plenty of room, whether hiking, biking, snowmobiling or cross-country skiing. Keep pets away and avoid moose that appear stressed by human activity.  Sidener adds that in the interests of safety, people should consider leaving their dog at home if they plan to visit an area where moose are common, even if it is legal to walk a dog in the area.

If you encounter a moose, signs that it is agitated by your presence and may charge include, a lowered head, ears pinned back, raised hackles, swaying back and forth and licking its snout.  In some cases, moose may not give any warning that it may charge and it is up to you to be aware of your surroundings. Leave the area as quickly as possible and avoid cornering the animal.  If the moose charges you, run away as fast as possible and try to put a tree, vehicle or other large object in between you and the moose. If you are knocked down, get up and try to get away. Do not stay on the ground.

Moose are fascinating animals and have become a prominent species among Colorado’s wide variety of wildlife.  Watching them can be a rewarding and unique experience as long as they are given plenty of space and respect.  ”Enjoy viewing wildlife from a distance by using binoculars, a camera lens or a spotting scope and do not let your dog approach moose or other wildlife,” said Watchable Wildlife Coordinator Trina Romero. “A rule of thumb to keep in mind with all wildlife – if the animal reacts to your presence, you are definitely too close.”  For more information and tips about moose watching, visit Colorado Parks and Wildlife’s “Living with wildlife in moose country [1].”  Colorado Parks and Wildlife manages 42 state parks, all of Colorado’s wildlife, more than 300 state wildlife areas and a host of recreational programs. To learn more, please visit cpw.state.co.us [2].  For more news about Division of Wildlife go to: http://wildlife.state.co.us/NewsMedia/PressReleases [3]  For more information about Division of Wildlife go to: http://wildlife.state.co.us [4].