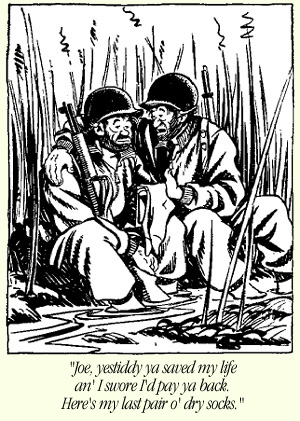 [3] Click on picture for more images of Willie and Joe

On the 70th anniversary of the D-Day landings, Brian Williams led off NBC Nightly News this way [4]: “On our broadcast tonight, the salute to the warriors who stormed the beaches here in Normandy…”  It’s such a commonplace of our American world, that word “warriors” for those in the U.S. military or, as is said time and again, our “wounded warriors” for those hurt in one of our many wars.  This time, however, because it was applied to the vets of World War II, my father’s war, it stopped me in my tracks.  For just a moment, I couldn’t help imagining what my father would have said, had anyone called him — or any of the air commandos in Burma for whom he was “operations officer” — a warrior.  Though he’s been dead now for three decades, I don’t have a moment’s doubt that he would have thought it ridiculous.  In World War I, America’s soldiers had been known as “doughboys.”  In World War II, they were regularly (and proudly) called “dogfaces” or G.I. (for “government issue”) Joes, and their citizen-soldier likenesses were reflected in the tough but bedraggled figures of Willy and Joe, Bill Mauldin’s [5] much beloved wartime cartoon foot soldiers [6] on the long slog to Berlin.

And that was fitting for a civilian military, a draft military.  It was down to earth.  It was how you described people who had left civilian life with every intention of returning to it as soon as humanly possible, who thought the military a grim necessity of a terrible moment in history and that war, a terrible but necessary way to go.  In those days, warriors would have been an alien term, the sort you associated with, say, Prussians.

My father volunteered just after the attack on Pearl Harbor and wasn’t demobilized until the war ended, but — I remember it well in the years after — while he took pride in his service, he maintained a typical and healthy American dislike (to put it politely) for what he called “the regular army” and George Washington would have called a “standing army.”  He would have been amazed by the present American way of war and the propaganda universe we now live in when it comes to praising and elevating the U.S. military above the rest of society.  He would have found it inconceivable that a president’s wife would go on a popular TV show — I’m talking about Michelle Obama on “Nashville [7]” — and mix it up with fictional characters to laud for the umpteenth time America’s warriors and their service to the nation.

In Vietnam, of course, the term still wasn’t warrior, it was “grunt.”  The elevation of the American soldier to the heavens of praise and bombast came significantly after the end of the citizen army, particularly with what retired Air Force Lieutenant Colonel and TomDispatch regular [8] William Astore calls the new Fortress America mindset of the post-9/11 years and the ever more militarized world of constant war that went with it.

If only I could have picked up the phone, called my father, and heard the choice words he would have had for his newly elevated status as an American “warrior,” seven decades after Normandy.  But not being able to, on that D-Day anniversary I did the next best thing and called a 90-year-old friend, who was on a ship off one of those blood-soaked beaches as the invasion began.  Thinking back those 70 years with a certain pride, he remembered that the thing the foot soldiers of World War II resented most was saluting or saying “sir” to officers.  No warriors they — and no love for an eternal wartime either.  Put another way, the farther we’ve come from our last great military victory, symbolized by the events of June 6, 1944, the more elevated the language for describing, or perhaps whitewashing, a new American way of war that, for pure failure [9], may have few matches. Tom

Uncle Sam Doesn’t Want You — He Already Has You
The Militarized Realities of Fortress America
By William J. Astore [2]

I spent four college years in the Reserve Officers’ Training Corps (ROTC) and then served 20 years in the U.S. Air Force.  In the military, especially in basic training, you have no privacy.  The government owns you.  You’re “government issue,” just another G.I., a number on a dogtag that has your blood type and religion in case you need a transfusion or last rites.  You get used to it.  That sacrifice of individual privacy and personal autonomy is the price you pay for joining the military.  Heck, I got a good career and a pension out of it, so don’t cry for me, America.

But this country has changed a lot since I joined ROTC in 1981, was fingerprinted, typed for blood, and otherwise poked and prodded. (I needed a medical waiver for myopia.)  Nowadays, in Fortress America, every one of us is, in some sense, government issue in a surveillance state [10] gone mad.

Unlike the recruiting poster [11] of old, Uncle Sam doesn’t want you anymore — he already has you.