LOVELAND, Colo. – The Colorado Eagles took Game 1 of the Central Hockey League’s Ray Miron Presidents’ Cup Finals with a 3-2 overtime win against the Bossier-Shreveport Mudbugs. It was another tight playoff game between the two teams, marking the fifth of fourteen all-time meetings to go into overtime (35.7%) and the 11th of those contests decided by just a single goal (78.6%).

Although the Eagles held the edge in possession time during the first period, they trailed the Mudbugs in shots 6-9, due in large part to Bossier-Shreveport’s trademark defensive trap system. Both teams went scoreless in the frame, each having one chance on the power play.

Colorado struck first, getting their league-leading 10th opening goal of the playoffs at 4:07 of the second period. On the play, Riley Nelson stole an errant pass along the left wing boards in the offensive zone and sent a centering pass toward the net where Daymen Rycroft deflected it past John DeCaro. The ‘Bugs tied the game at 11:35 by cashing in on their second consecutive power play when Jeff Kyrzakos put home his second whack at a rebound from the low slot. 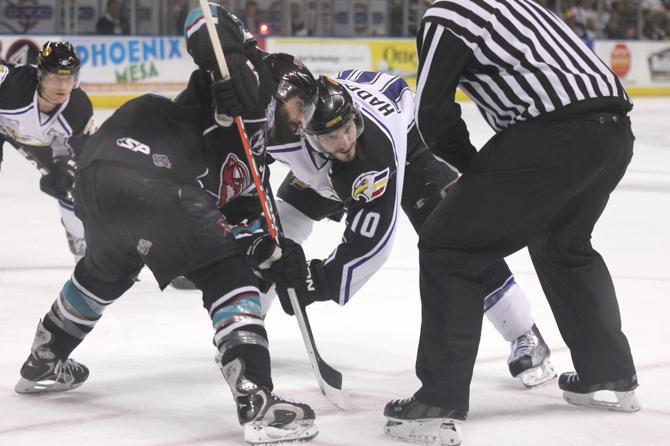 Nelson put Colorado up 2-1 at 5:24 of the third period when Kevin Ulanski sent a pass from atop the right circle that the Eagles’ captain deftly deflected past DeCaro from just below the hashes. But at 16:40, David Rutherford — who had several stellar individual efforts in the period — tied the game with a great shot from above the right circle that beat Kyle Jones top-shelf. The game would remain tied at 2 for the remainder of the frame, sending the contest into overtime.

The Eagles came out with the better of the jump in the overtime period, out-shooting the Mudbugs 8-3. And at 8:26 of the frame, Dan Sullivan found Matt Glasser alone at the point for a slap-shot into the back of the net.

Game 2 of the best-of-seven series will be played at the Budweiser Events Center Saturday night; puck-drop is scheduled for 7:05.