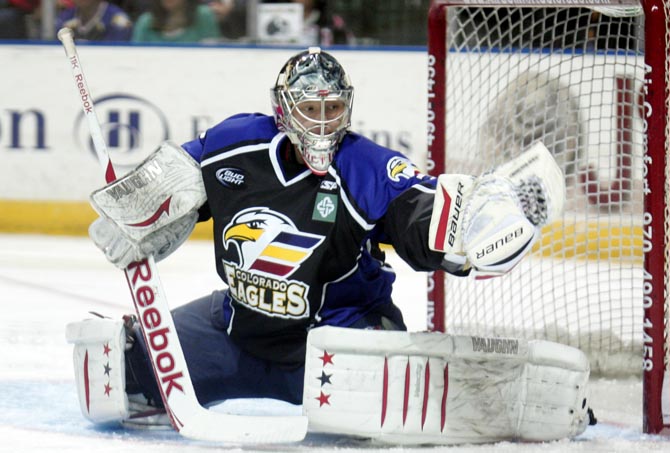 LOVELAND, Colo. – The Colorado Eagles defeated the Ontario Reign, 3-0, denying the Western Conference’s 2nd place team important points in its attempt to catch the defending champion Alaska Aces, while at the same time securing home ice advantage in the opening round of the upcoming Kelly Cup playoffs by locking up the conference’s 4th seed.

Rookie Damien Ketlo, signed last week as an amateur, stopped all 27 Reign shots to pick up a shutout in his first start as a professional.  He was aided by Colorado’s penalty-killers, who went a perfect 9-for-9 on the night.

The first period of play saw plenty of solid defense as the Eagles took a 1-0 lead into the first intermission.  Several of Colorado’s chances came following blocked shots and intercepted passes that led to rushes the opposite way.  The period’s lone goal came on one such rush when Aaron Slattengren snapped a shot past Jean-Francois Berube from the slot at 3:14.

The Eagles controlled much of the play in the second period, out-shooting Ontario, 14-7, but both netminders continued their strong play in the session, and neither team was able to find the back of the net.  Berube had arguably the best save of the frame, throwing out his right leg to stop a back-door, power-play chance from the doorstep with 30 seconds left in the period.

Colorado’s penalty-killers continued their excellent work in the final frame, shutting down four more Reign power plays, including over a minute of 5-on-3 action early on.  And midway through the period, rookie defenseman Jake Marto added some insurance by picking up his second career goal (both of which have come in the past three games).  The goal came on a 2-on-1 rush in which Marto looked off Berube and shot the puck inside the far post from the right circle.

And just under five minutes later, the other half of the Eagles’ special teams capped off their successful night when Joey Sides roofed a shot from the low slot following a series of crisp passes within Ontario’s zone.

The two teams will meet again Wednesday night at the Budweiser Events Center.

LOVELAND, Colo. – The Colorado Eagles, proud affiliate of the NHL’s Winnipeg Jets & the AHL’s St. John’s IceCaps, announced this evening the dates for their upcoming series in the opening round of the ECHL’s Kelly Cup playoffs.  With their win tonight, the Eagles locked up 4th place in the Western Conference in their first season in the ECHL; their opening round opponent will be determined by the end of the week.

Regardless of which team the Eagles play in the opening round, they will start the 5-game series on the road with games on Tuesday, April 3 & Wednesday, April 4.  Games 3, 4, & 5 (the final two, if necessary) will be played at the Budweiser Events Center on Friday, April 6, Saturday, April 7 & Monday, April 9.  Eagles home games will start at 7:05 p.m. (MST).

Tickets for the home dates are on sale now (starting at just $16) and can be purchased by visiting www.ComcastTix.com [2] or calling 1-877-544-TIXX (8499).  Eagles season ticket holders should use the blue, round 1 tickets in the back of their ticket books (complete details outlined below).