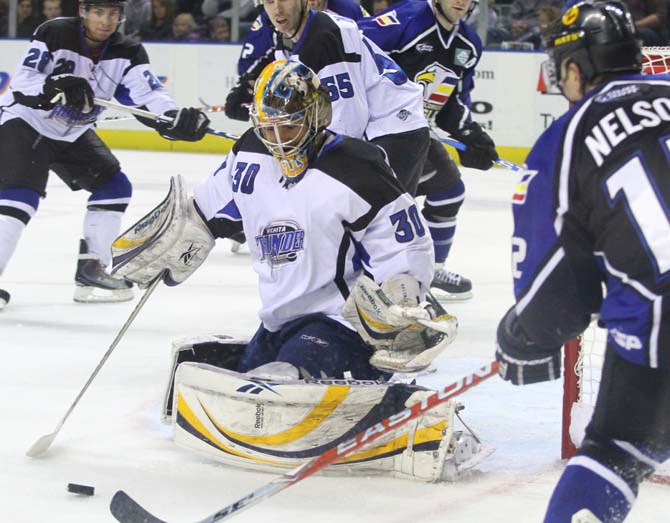 LOVELAND, Colo. – The Colorado Eagles defeated the Wichita Thunder, 5-4, in overtime, and in the process, clinched their eighth playoff berth in as many seasons of existence (more than a full month before the regular season ends). Special teams played a large role in the game, with the Eagles’ stopping eight of nine Thunder power plays, while converting on two of their own six.

Colorado got the game’s opening goal just 29 seconds in when Riley Nelson circled behind the opposing net and backhanded a pass to Dan Sullivan on the doorstep for a backhand shot that beat Marc-Antoine Gelinas 5-hole. But the Thunder scored the next three goals to take a 3-1 lead into the first intermission.

Wichita’s first goal came at 5:20 when Chris Greene sent a pass from below the goal line to the right of the net to Matt Robinson in the slot. Robinson entered the game as the league’s third-highest scorer, and he showed why by snapping a shot past Kyle Jones to tie the game at 1.

Jesse Bennefield — Wichita’s second-leading scorer — showed his offensive prowess at 11:04 when he scored on a shot from below the left circle. And at 16:44, Robin Richards made it three unanswered goals by converting on a breakaway to give the Thunder a 3-1 lead.

Colorado got another quick strike to start the second period with a goal just 15 seconds in when Nelson knocked home a rebound in the last second of a power play. Each team had several power plays in the second stanza — including many 5-on-3 chances — but neither could convert. In fact, Wichita would start the third period with 37 seconds worth of a two-man advantage.

The Eagles tied the game at 3, 4:53 into the third period when Aaron Schneekloth chipped the puck over Gelinas after the rebound from Kevin Ulanski’s point shot fell into the crease. Colorado took the lead at 8:47 when Ulanski sent Steve Haddon on a breakaway by chipping the puck forward from the neutral zone. Haddon then beat the Thunder netminder with a rocket from the top of the left circle.

But Wichita tied the game back up with their lone power-play goal at 11:39 when Andrew Martens shot from the point found the back of the net. The Thunder had another good opportunity to re-gain the lead as the period came to a close, working most of the final two minutes with their ninth power play, but the Eagles successfully killed that chance to push the game into overtime and earn the point that pushed them into the playoffs.

Colorado claimed the game’s second point 1:34 into the overtime session when Adam Chorneyko ended the game with a goal from the right circle. The rookie forward sped down the right wing on a breakaway before using Kory Scoran as a screen to beat Gelinas.

The Eagles’ next game will come in Wichita on Tuesday, March 1 when the two teams close out their season series.