LOVELAND, Colo. – The Colorado Eagles evened their opening round Central Hockey League playoff series against the Quad City Mallards with a 5-4, overtime victory in Game 2 of the best-of-5 series. It marked the second night in a row that the winning team came back from behind to force overtime before winning the game early in the extra session.

Quad City struck first with a power-play goal at 5:20 of the first period when Adam Maccarone’s shot from the point deflected past Kyle Jones. The Mallards stretched their lead to 2-0 at 10:53 when Jake Riddle dug the puck out of a scrum in the left corner and carried it behind the net for a wraparound attempt. His try didn’t go in, but the rebound went right to Joel Gasper for an easy tally from the doorstep.

Colorado, however, countered just 21 seconds later, trimming the Mallards’ lead in half with their first goal of the game. Following an odd bounce off the endboards, the puck came back out into the slot where Daymen Rycroft was able to collect it and snap it past David Brown.

The second period scoring mirrored the first’s, sending the Mallards into the third period with a 4-2 lead. Quad City made it 3-1 at 2:33 of the frame when Tyler Shelast got past the Eagles defense along the left wing and found Eric Giosa with a centering pass into the slot. That goal chased Jones from the net after the former Mallard stopped just seven of 10 shots in 22:33 of action.

Andrew Penner took Jones’ place in net for the Eagles and helped swing the momentum two minutes later by making a series of saves from in close that earned a huge roar from the home crowd.

Colorado got back within a goal at 15:14 when Riley Nelson scored a power-play goal. On the play, Kevin Ulanski’s shot from the high slot was blocked by teammate Dan Sullivan on the doorstep, but the puck bounced right to Nelson who cleaned up the rebound. However, at 18:30, Zac Pearson took advantage of a turnover deep in the Eagles’ own zone to beat Penner from in close, giving the Mallards a 2-goal lead heading into the second break.

The Eagles came out flying in the third, playing their best period of the playoffs and out-shooting the Mallards 19-6. The effort was so dominating that the sellout crowd showed their appreciation by giving the team a standing ovation 12 minutes into the third when shots were 11-2.

Prior to that, the team had tied the game at 4 with goals by Nelson and Joe Grimaldi. Nelson’s goal — his second of the game and third in two nights — came 1:57 in after a faceoff win in the left circle of the offensive zone. Ulanski controlled the puck and worked it back to the left point where Jason Beatty’s shot deflected off of Aaron Schneekloth and bounced to the league MVP for a shot into a gaping net from the right circle. 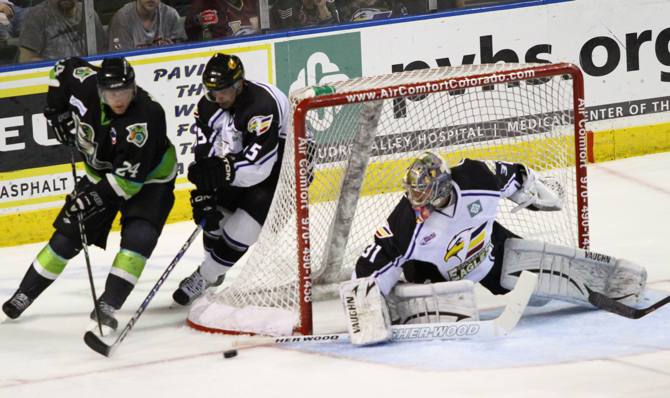 [1]
Andrew Penner watches the action as Kyle Petro battles for the puck. Photo by Michael Kalush

Penner continued to keep the Eagles in the game moments later by stopping a 3-on-2 rush and another odd-man break at 4:45. Coming back off the latter stop, the play moved the other way 3-on-3 and Grimaldi laced a shot from two feet inside the blue line that beat Brown over his right shoulder to knot the score at 4. Despite continued quality pressure, Colorado couldn’t score again in the period, forcing overtime for the second night in a row.

The Mallards had an early burst in overtime, but Penner made a glove save on an off-speed puck 16 seconds in on the only shot Quad City would get in the extra time. That’s because 62 seconds into the frame, Rycroft put home his own rebound from the low slot after the Eagles won a faceoff in the right circle of their offensive zone.

Rycroft’s second goal of the game evened the series at 1 as the teams head to Moline, Ill. for Games 3 & 4 on April 5 & 6. If necessary, Game 5 would be back at the Budweiser Events Center on Saturday, April 9.