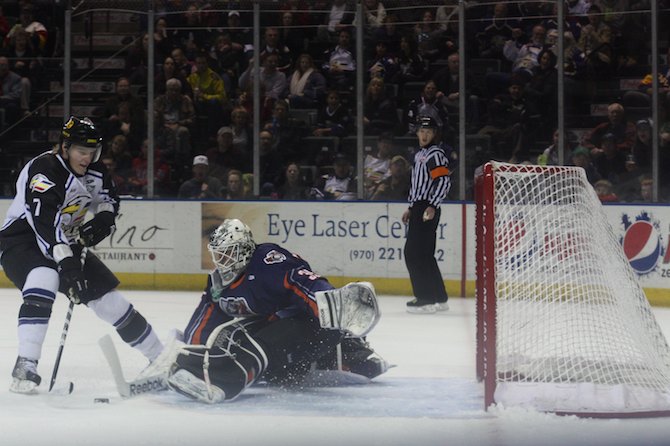 LOVELAND, Colo. – The Ontario Reign edged the Colorado Eagles, 9-8, in a shootout that was one of the wildest games ever played at the Budweiser Events Center — on several levels.  A total of 28 penalties were called between the two teams, resulting in a special teams nightmare that saw 11 of the 16 regulation goals scored via special teams (10 on the power play).  Five of the goals were scored on 5-on-3 power plays, including four in the second period alone.

Colorado built a 3-0 lead in the first 14 minutes of the game before Ontario countered with a pair in the next three minutes of action.  Rookie defenseman Ben Chiarot opened the scoring just 1:33 into the contest with a heavy shot through traffic from atop the right circle on the Eagles’ first shot of the night.

Seven minutes later, Michael Forney sent a lead pass that sprung Chad Costello on a rush into the offensive zone where he fed Aaron Slattengren for a goal over Jean-Francois Berube’s right shoulder from the left circle.  And at 13:41, Costello found Forney in the slot where he made Berube look silly with a series of moves before depositing the puck into the net for a 3-0 lead.

But just 27 seconds later, the Reign were able to counter when Vincent LoVerde got their first goal of the game.  And three minutes later, Kevin Estrada put home a Derek Couture rebound from the doorstep just seven seconds into a 5-on-3 advantage.

Referee Curtis Marouelli doled out 14 of the game’s 28 penalties in the wild second period, which saw seven goals scored via power plays and one by Ontario while shorthanded.  The teams traded goals for the first four of the second period — the first two coming on 5-on-3 power-plays — before five more power-play markers were registered before the end of the frame, leaving the Eagles with an 8-6 lead heading into the third.

The Reign were able to tie the game in the third with another pair of power-play tallies, forcing an overtime session that went without a goal — and without a penalty…until the final horn.

The teams will meet for the third time this week Saturday night.