LOVELAND, Colo. – The Evansville IceMen made their first ever visit to the Budweiser Events Center and came away with a 3-2 win against the Colorado Eagles. The loss came in Colorado’s final home game of the month, as they now head on an extended road trip; 11 of their next 12 games will be on the road.

[1]
Mark Cody puts Evansville on the board. Photo by Lisa Fisbeck

The IceMen out-shot the Eagles 12-9 in the first period, but each team was able to find the back of the net once in the first 20 minutes. Andrew Penner was sharp in net for Colorado, but Evansville was able to get the opening goal past him at 16:03 when Lee Zalasky (who was in training camp with Colorado) sent a centering feed on net from the left circle and Mark Cody, who was crashing the net, got his stick on it to pop it over Penner’s pad.

Colorado countered at 17:52 when Adam Hogg sent a pass from below the left circle to Steve Haddon for a one-timer from the near-by circle. Haddon’s shot was blocked, but the puck ended up in the low slot where it deflected off Brett Thurston’s skate and into the net. With the assist, Haddon tied Scott Polaski on the Eagles’ all-time points list in eighth place.

The Eagles controlled nearly all of the play in the second period, out-shooting Evansville 12-4. But they could get only one goal past Matt Lundin, and that came with just over a minute and a half left in the frame while Colorado worked its third power play of the period.

On the goal, Daymen Rycroft dropped a pass to Riley Nelson entering the offensive zone and the Eagles’ captain sent a pass from the high slot to a falling Kevin Ulanski for a one-timer from the right circle — each of the latter two extending their respective point streaks to nine games. 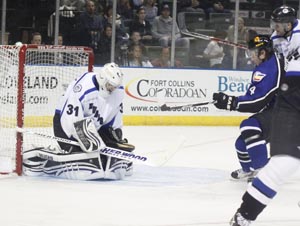 The Eagles hit the road for three games in as many days this weekend: a pair of games Friday and Saturday against the Quad City Mallards followed by a meeting with the Bloomington PrairieThunder Sunday.