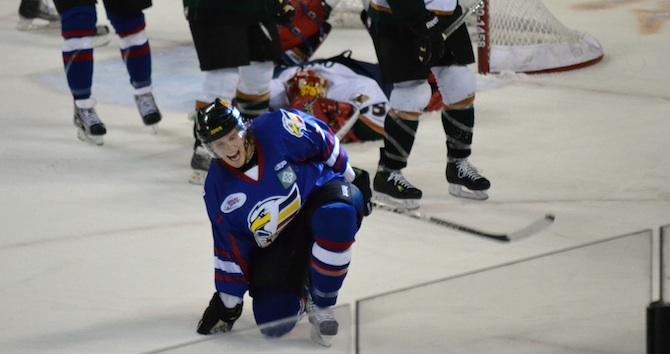 Eagles Give Fans Early Present With 6-0 Win Over Utah

LOVELAND, Colo. – The Eagles continued their winning ways with a 6-0 victory over the Utah Grizzlies, claiming at least a point in their 11th game in a row with their seventh consecutive win. Kyle Jones stopped 22 shots to post his second shutout of the season as Colorado climbed closer to the top of the ECHL standings with a record of 18-8-3 (39 points).

Colorado out-shot Utah 20-8 on the way to building a 3-0 lead in the first period. Alex Penner got the game’s first goal at 9:55 of the opening frame. On the play, he sent a pass from the slot to Patrick Cey in the left circle. Cey’s shot slipped past Shane Owen, but Tysen Dowzak swept it out of the crease before it could cross the goal line. The defenseman’s clearing attempt, however, went right off Penner’s stick and into the net.

Kevin Ulanski scored the next two goals, each coming less than two minutes after the prior. At 11:33, Ulanski was tripped up by Owen while taking up camp on the doorstep. As that was happening, Luka Vidmar was sending a shot on net from the right point, and Ulanski rolled over and swatted in the rebound from his belly.

Then, at 13:27, Ulanski snapped a shot home from the right circle on a power play to make it 3-0. Earlier on that man-advantage, Jones had stopped a great shorthanded chance by the Grizzlies, highlighting his strong opening period.

Jones continued to smother every Utah chance in the second period, stopping each of their 11 shots. And at 12:57, Chad Costello added to his league lead in points to make it 4-0. On the play, Aaron Schneekloth pinched through the right circle and sent a backhand pass to Costello in the left circle.

Colorado made it 5-0 midway through the third period with another power-play goal when Schneekloth blasted a shot from the point that clanged off the iron before Riley Nelson put home the rebound from the low slot. A minute later, Jones made what may have been his best save of the night, sliding right to left to stone one of the Grizzlies’ three shots in the frame.

Michael Forney capped the scoring at 16:59 following a faceoff in the left circle of the Eagles’ offensive zone. He grabbed the puck in the left slot, skated it into the low slot and made some slick moves before burying the puck past Owen.

Colorado will have the rest of the weekend off before traveling to take on the 1st place Aces in Alaska. The three games against the defending league champions (the 28th, 30th & 31st) will be the first regular season meetings between the teams this season.