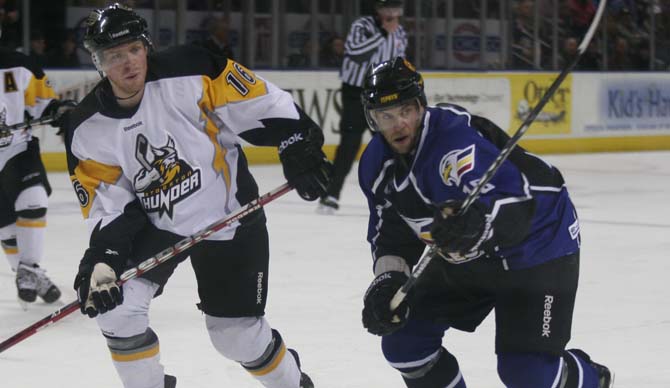 LOVELAND, Colo. – The Stockton Thunder defeated the Colorado Eagles, 6-2, splitting a set of back-to-back games this week.  The Thunder scored five unanswered goals starting in the final few seconds of the first period to skate away with the win and inch closer to a playoff berth one night after the Eagles clinched their own.

Stockton started the scoring 3:33 into the first period when Matt Reber’s shot from the point was deflected by Jordan Fulton stationed on the doorstop.  But the Eagles used a pair of power-play goals to take the lead midway through the frame.

Steve Haddon tied the game by deflecting a Riley Nelson point shot past Thomas Heemskerk for a 5-on-3 goal.  And then less than a minute later, on the second portion of the man-advantage, Joey Sides deflected a Ben Chiarot one-time blast from the point to put Colorado up 2-1.

The Eagles had two more power plays later in the opening period, but couldn’t capitalize.  And with just 4.9 seconds left, Cameron Brodie sent a long lead pass diagonally through the neutral zone to send Chris D’Alvise on a rush that ended when he beat Kyle Jones from the left circle.

The Thunder carried that momentum into the second stanza, scoring all three of the period’s goals to take a 5-2 lead into the third period.  Jody Pederson made it 3-2 with his first goal of the season when his shot from the left point fooled Jones and ended up soaring over his shoulder at 8:51.  Stockton doubled their lead at 11:25 following a turnover deep in Colorado’s zone when Fulton sent a pass from behind the net to Gabriel Levesque in the low slot for a tap-in.

Stockton had three consecutive power plays to finish the second frame — they received all five of the period’s power plays — but converted on just one.  On the play, Jones stopped a Nathan Deck shot with his right pad, but the rebound kicked right to a wide open Kevin Baker in the left circle for the put-back.

Two different Eagles shots rang off the crossbar in the first six and a half minutes of the third period, but that’s as close as they’d get to formulating a comeback.  And as Stockton’s power plays continued to mount, they tallied the game’s final goal with a 5-on-3 marker at 17:06 when Max Campbell found the back of the net from between the circles.

The Eagles will travel to Alaska Thursday for a pair of games Friday & Saturday against the ECHL-leading — and defending league champion — Aces.  Those two teams will return to Colorado next week for three more games to complete their five-game series.