LOVELAND, Colo. – The Colorado Eagles took a 3-1 series lead in the best-of-seven Turner Conference Finals in what became an instant classic between rival teams. The game — which turned into the longest in each franchise’s history — featured a goaltending duel rematch from Game 1 of the series that pitted Tim Boron against Kyle Jones. Adam Chorneyko scored the game-winning goal in the third overtime period to net the Eagles’ 400th win in franchise history (regular season and playoffs combined).

The teams that finished the regular season with identical records played an even first period — with 16 shots apiece — that saw them enter the first intermission in a scoreless tie.

The period was highlighted by some good goaltending, the best of which came from former Eagle Boron late in the period. With Colorado on the power play, Boron robbed Kevin Ulanski who ended up alone in the low slot. And then off the ensuing faceoff, the goalie snared an Aaron Schneekloth point blast by coming way out on top of his crease

Jones picked up where Boron left off in the first period, robbing Jesse Schultz with a glove save as the Rush came 2-on-1 into the Eagles’ end just over a minute into the second stanza. But at 10:53 of the frame, Scott Wray was able to get the game’s first puck past a netminder when he put home a rebound from the low slot on a power play

As the third period wound down, it looked as though Boron would post the first playoff shutout at the Budweiser Events Center, but at 16:23, Ulanski took a shot from the left circle that knuckled into the top shelf over the goaltender’s head. Neither team would score again in the period, sending the game to overtime.

The Eagles came out soaring to start the first overtime period, playing the most dominant half period of the season. But despite nearly all of the play taking place in Rapid City’s zone — leading to several outstanding chances — Colorado couldn’t get the puck in the net.

Possibly their best opportunity came at 9:58 when Daymen Rycroft was hooked down on a breakaway, resulting in a penalty shot that was taken by Ulanski (who was voted by his peers as the best player in the league in shootouts). Ulanski tried his nearly-always-successful backhand move, but Boron stopped it with his left pad.

The home crowd stood on their feet for most of the frame, trying to will their team to victory, but the Rush steadied in the second half of the period in which neither team would tally, sending the game into a second overtime period. 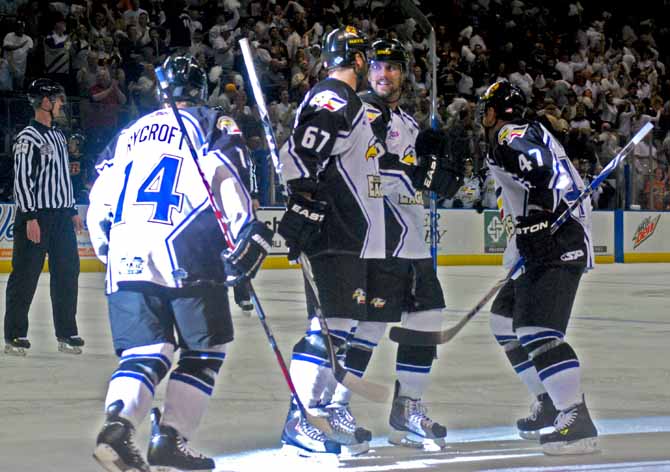 Rapid City had a slight edge in the second overtime, out-shooting Colorado 15-12 with the help of two power plays. But the goalies again held their ground, forcing a third overtime — the longest game for either franchise in their respective histories.

Colorado out-shot Rapid City 8-1 in the third overtime period before Chorneyko ended the contest 4:35 in. Another former Eagle, Konrad Reeder, nearly combined with Boron to ruin Colorado’s night four minutes earlier when he rung a shot off the crux of the right goal post.

And the Eagles nearly ended it a minute and a half before Chorneyko’s deciding goal, but Boron again robbed Kyle Peto by moving left to right and snaring a shot ticketed for the top right corner of the cage.

But in the middle of the 104th minute, Scott May found Chorneyko in the right circle where the rookie standout snapped his team’s 70th shot of the game — a CHL playoff record — into the twine for the win. Boron’s 68 saves also set a new league playoff record.

The teams will now travel to Rapid City, S.D. for Game 5 on Saturday. If necessary, Game 6 would be back in Colorado on Monday, May 9. If necessary, a deciding Game 7 would be played on Rush home ice on Wednesday, May 11.