LOVELAND, Colo. – The Colorado Eagles overcame an early goal against to stop Rapid City’s 13-game win streak and Danny Battochio’s personal nine-game win streak with a convincing 6-2 triumph. The win brought Colorado within a point of the Rush for the top spot in the Turner Conference, with the Eagles owning a game in hand.

The Eagles nearly doubled up the Rush on shots in the opening period (17:9), and did double them up in goals (2:1). Rapid City wasted no time getting the scoring started, making it 1-0 just 14 seconds into the contest. Les Reaney won a faceoff in the right circle of the offensive zone, and Dave Grimson’s shot from the point made its way through a slew of bodies and past Kyle Jones. 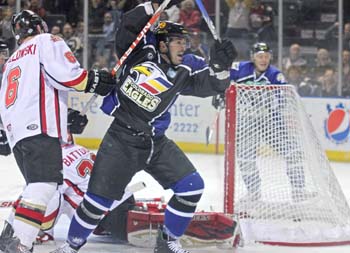 Colorado tied the game at 10:03 when Matt Hanson sent the puck on net from the right point only to have it deflect off a Rush player and then off Andrej Hebar’s stick as he was battling for position in the low slot. Just over a minute later, the Eagles scored a power-play goal after Aaron Schneekloth threw the puck on net from the point and Scott May was able to knock home the rebound; the puck banked off of the right post and then was pushed in by the sprawling netminder’s right skate.

The Eagles doubled up the Rush in goals (2:1) again in the second period, sending the home team into the third period with a 4-2 lead. It was Colorado that got a quick goal in the second stanza when Riley Nelson scored into a wide open net just 39 seconds in.

On the play, Kyle Peto chipped the puck into the offensive zone along the right wing and Battochio went behind his net to stop it. The Rush goalie then tried to backhand the disk to a teammate, but it hit a break in the boards and popped right to a forechecking Adam Chorneyko. The rookie forward quickly fed Nelson who was crashing the net for an easy goal. 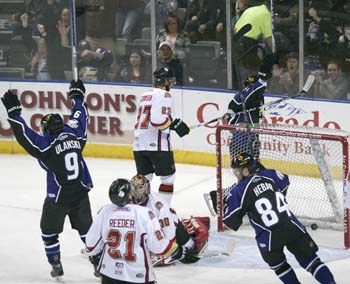 Colorado chased Battochio just over three minutes into the second period after Kevin Ulanski led a 4-on-2 rush into Rapid City’s end down the left wing and sent a cross-ice pass to Joe Grimaldi for a well-placed shot just inside the left post. Tim Boron then replaced Battochio who had stopped 20 of 24 shots in just over 23 minutes of play.

Rapid City cut Colorado’s lead in half at 11:35 of the middle frame, just eight seconds after their second power play of the game had expired. Derek LeBlanc took the puck from behind the net in the offensive zone and placed a sharp-angle shot over Jones’ shoulder from below the right circle.

The Rush were given a power play early in the third and could have gained momentum and made it a one-goal game with plenty of time, but the Eagles were able to successfully kill Rapid City’s man advantage. Colorado nearly made it 5-2 at 5:51 of the final frame when Dan Sullivan poked home his own rebound that had fallen to the ice between Boron’s legs, but the goal was waived off due to a premature whistle from the referee.

It mattered little to the resilient Eagles as they got that goal at 15:20 when Hanson blasted a bomb of a shot from atop the left circle on the power play. And 41 seconds later, Chorneyko sent Nelson on a breakaway on which the captain blasted another shot past Boron from a similar spot to account for the final margin.

Colorado’s next game will come Saturday night when the Wichita Thunder come to the Budweiser Events Center.