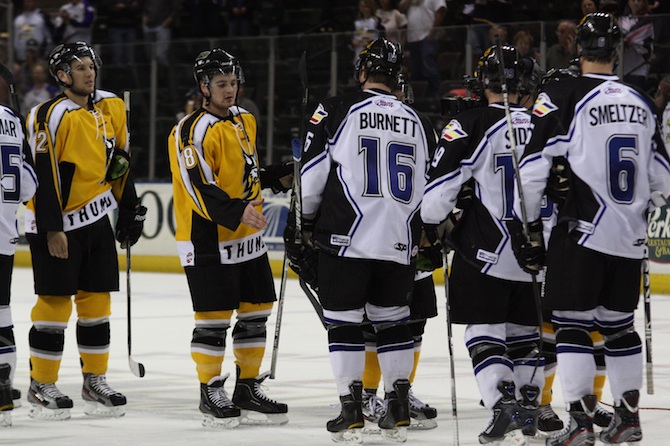 LOVELAND, Colo. – The Stockton Thunder defeated the Colorado Eagles, 4-2, sweeping their best-of-five Western Conference Quarterfinals series three games to none.  With the win, the 5th-seeded Thunder advance to take on the defending ECHL champion and 2011-12 regular season champion Alaska Aces in what will be a best-of-seven series.

Colorado killed two early Stockton power plays, and Aaron Slattengren nearly put the home team on top at 5:15 of the first period when his back-hand chance rung off the crossbar.  But the Thunder were able to strike first 14 minutes in when Matt Foy stuffed a wraparound chance under Kyle Jones.

Stockton went on the penalty kill half a minute later, and Olivier Roy — who was great all series long — made a big blocker save on Kevin Ulanski from the slot halfway through the man-advantage.  But following the next faceoff, Colorado was able to tie the game after a scramble in the low slot led to Jake Marto collecting the loose puck in the slot.  He delayed and sent a cross-ice pass to Steve Haddon for an open look he converted.

The Eagles out-shot the Thunder, 12-6, in the second stanza, but it was Stockton that scored the period’s only two goals — both by Max Campbell.  The first came two minutes in on a 5-on-3 power play when the forward laced a perfect shot outside of Aaron Schneekloth’s legs and just inside the left post to make it 2-1.  His second goal (and 9th in as many games against the Eagles) came with the teams skating 4-on-4 when he scored on a similar shot off a rush at 15:24.

Colorado began building momentum at the end of the second period and continued to make a final push in the third when they were able to cut Stockton’s lead to 3-2 with a 5-on-3 power-play goal of their own.  Riley Nelson put home a loose puck from the low slot 3:30 into the final frame, and the Eagles nearly tied the contest in the second half of the advantage, but Roy continued his stellar netminding to snuff their chances.

The Eagles had one final golden opportunity to tie the game when they were awarded another power play in the final minute, but Jordan Fulton was able to deposit the puck into Colorado’s empty net with 25 seconds left to ice the game and the series.