The Berthoud High girls basketball team lost in the opening game of the Berthoud Tournament to the Thompson Valley Eagles 49-40 on Wednesday afternoon. The loss drops the Lady Spartans to 2-2 on the young 2011-12 season while the victory improves Thompson Valley to 3-0.

Despite out-shooting Thompson Valley 40% (14/35) to 34% (15/44), sloppy play cost the Lady Spartans as Berthoud committed 30 turnovers in 32 minutes of play. Thompson Valley’s use of the full-court press frustrated Berthoud for much of the game. 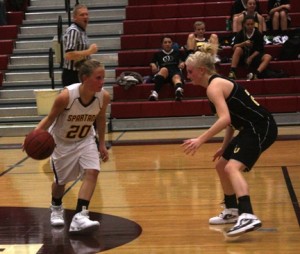 Based in large part to their execution on the press, Thompson Valley accumulated 19 team steals, an inordinate eight of which came thanks to junior Cassie Baalke.

“We had too many turnovers throughout the whole game, we’ve got to cut that down, and they just didn’t miss many free throws,” said Berthoud Head Coach Randy Earl after the game. The Lady Eagles made good on 19 of their 24 free throws, far better than Berthoud’s 9/18 mark from the stripe.

Despite going into the locker room at halftime up only one, 16-15, Thompson Valley was able to pull ahead in the second half as they out-scored Berthoud 33-25 in the final two periods. The Eagles’ second half surge came largely credit of Baalke, who scored 13 of her game-high 17 points in the second half.

The real difference in the final periods came at the free throw line. Thompson Valley was afforded 21 free throw attempts in the second half, making good on 16.

When asked if fatigue played a role in Berthoud’s penchant for committing fouls, coach Earl said, “Yeah, we get a little tired and we get bad habits and we start fouling a little bit.”

Baalke was the player of the game for Thompson Valley, the junior’s 17 points and eight steals led all players.  Berthoud’s biggest contributor was senior Dillon Fagler whose 15 points were more than double any of her teammates and her eight rebounds were the most of any player on the floor.

The Lady Spartans will play their second game of the 2011 Berthoud Tournament in a match-up with Mountain View at 6:30 pm in the BHS gym. Berthoud will close out the tournament on Saturday afternoon when they play Northridge at 1pm.