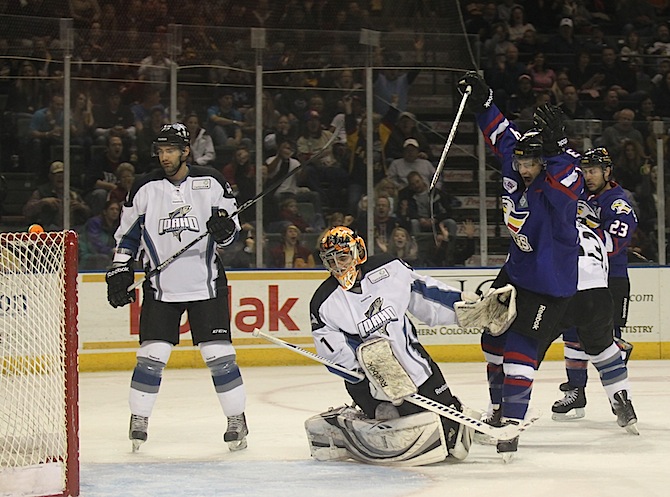 LOVELAND, Colo. – The Colorado Eagles defeated the Idaho Steelheads, 5-1, extending their winning streak to six games with balanced scoring as five different players found the back of the net.  Kyle Jones picked up his sixth win in a row as well, increasing his season total to 23 — 2nd-most in the ECHL.

The teams skated to a scoreless opening frame that saw Colorado out-shoot Idaho 11-4, despite the Steelheads being awarded the only two power plays of the period.

There was an extra 30 minute delay prior to the start of the second period due to an accident between the Zamboni and the end boards, but it was worth the wait for the home crowd as the Eagles stormed to a 4-0 lead in the second stanza.

The game’s first goal came at 7:42 of the second period when Riley Nelson’s shot from atop the right circle was deflected by Aaron Schneekloth on the doorstep.  The goal gave the defenseman his 300th point as an Eagle (101-199-300), an accomplishment that was recognized with a standing ovation from the crowd when it was announced.

Four minutes later, Chad Costello would make his return to the team a successful one — just as Michael Forney had done the night before — by making it 2-0 after receiving a lead pass from Liam Huculak and blasting a shot past Bryan Hince from the right circle.

And a minute and a half later, Joey Sides took a pass from Kevin Ulanski in the slot — splitting the defense and raising the referee’s arm in the process — before beating the Steelheads’ goalie from up close.  Forney looked to make it 4-0 four minutes later, only to have his goal waived off. But the Eagles accounted for that as time expired on the period when Nelson found himself in the right place at the right time to punch the puck inside the right post.

Jerry Kuhn began the third period between the pipes for Idaho, replacing Hince who had stopped 25 of 29 shots in 40 minutes of action.  And at 8:43, Michael Neal finally got the Steelheads on the board by putting home a bouncing puck from the doorstep.

Colorado countered with the game’s final goal at 12:21 on a play started and finished by Tommy Maxwell.  The bruising forward’s big hit in the right corner led to the puck finding Steve Haddon in the high slot.  Haddon’s shot was stopped by Kuhn, but put home by Maxwell as he skated through the low slot.

The Eagles will now take their winning streak on the road where they’ll finish their busy week with three games in as many days in California on Friday (Ontario), Saturday (Stockton) & Sunday (Stockton).