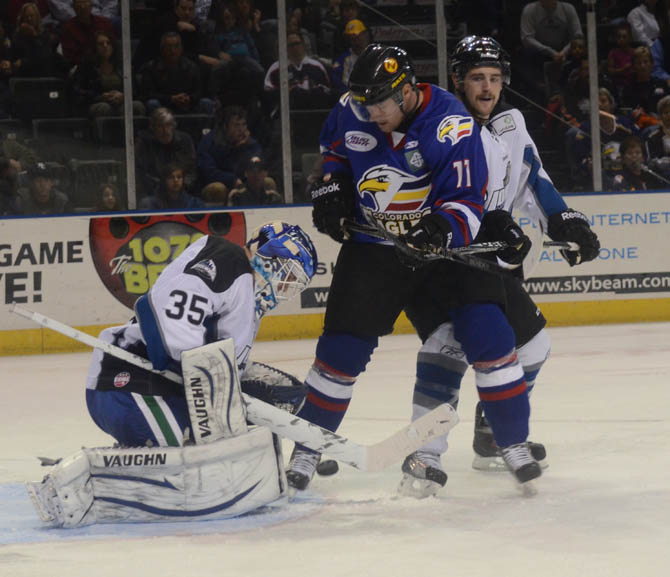 LOVELAND, Colo. – A short-benched Colorado Eagles team defeated the Idaho Steelheads, 5-4, in overtime in the first of three meetings between the teams this week. Skating with just 14 skaters for two-thirds of the game, and 13 for the final third, Colorado out-shot Idaho 38-20 in a fast-paced game at the Budweiser Events Center.

The Eagles out-shot the Steelheads 12-7 in the first period, but it was Idaho that led 2-1 at the first intermission. The visitors scored first at 3:05 by taking advantage of a turnover inside the Eagles’ blue line when David Fredriksson put home a Chad Klassen rebound.

Colorado countered at 13:40 when Alex Penner sent a pass from behind the net to Jack Combs in the right slot. The red-hot Combs then backhanded a shot past Jerry Kuhn. Just over four minutes later, Idaho took advantage of another turnover inside the Eagles’ zone when old nemesis (from Rocky Mountain & Rapid City) Derek LeBlanc beat Kyle Jones with a wide-open one-timer after a cross-ice pass from Ian Lowe.

The Steelheads — and LeBlanc in particular — continued being opportunistic in the second period. Colorado out-shot Idaho 15-6 in the stanza, but it was Idaho that took a 3-2 lead into the third period. Adam Chorneyko tied the game at 2 at 2:25 when he threw the puck on net from the left wing and it deflected off of defenseman Chris Hepp and past Kuhn.

The bad luck continued for Idaho when they hit a pair of posts a minute apart shortly after Chorneyko’s tally. Then, at 14:09, LeBlanc — who entered the game with just one goal on the season — picked up his second of the game by roofing a shot from the left circle on a rush.

The Eagles tied the game at 3:05 of the third period when Aaron Schneekloth’s shot from the point on a power play got past the Idaho netminder. And at 13:53, Combs put Colorado up 4-3 when he converted on a penalty shot.

But the Steelheads were able to tie the game when they capitalized on a 5-on-3 power play at 17:34. Marty Flichel, playing in his 800th professional game, got the goal that helped force overtime when he scored from inside the right circle.

Colorado registered the only two shots of the overtime session, with the second one coming off the stick of Jon Landry. On the winning play, Steve Haddon tried to send a pass from above the right circle to the defenseman as he skated through the slot, but his pass deflected off of Steve Oleksy’s skate. Unfortunately for the Idaho defenseman, it bounced behind him and right onto Landry’s stick as he continued through the low slot all alone before making a move and beating Kuhn.

The teams will meet again Friday & Saturday at the Budweiser Events Center.