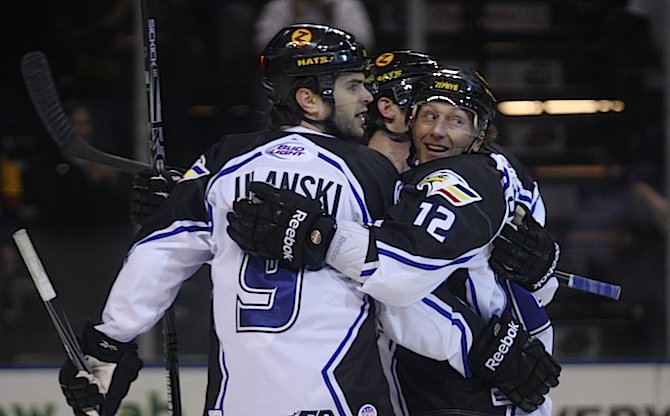 LOVELAND, Colo. – The Colorado Eagles ended a three-game losing streak in a big way with a 6-4 win over the Ontario Reign.  Kevin Ulanski (four points), Michael Forney & Joey Sides (three points apiece) led the Eagles’ offense, while Kyle Jones backstopped his 24th win of the year (second-most in the ECHL).

Riley Nelson put the home team up early, netting a rebound from the slot 3:16 into the game.  Two and a half minutes later, Ulanski sprung Sides on a rush with a bank-pass of the neutral zone boards.  Sides drug the puck across the slot before snapping a shot over Chris Carrozzi’s shoulder to make it 2-0.

Ontario cut that lead in half at 9:13 on their first power play of the night when Everett Sheen sent a pass from the left wing to Kyle Kraemer between the circles as the Reign entered the zone.  But Colorado restored their two-goal margin at 15:55 when Chad Costello, stationed behind the net, fed Forney who was cutting through the low slot.

The Reign nearly countered with three minutes left in the opening frame, but Aaron Schneekloth swept a puck out of the paint behind his netminder, springing Ulanski on a breakaway that nearly put Colorado up 4-1, except for a big save by Carrozzi.  The Eagles spent the end of the period killing off most of an Ontario 5-on-3 advantage amidst a five minute power play.

Colorado successfully killed the rest of the Reign’s power play at the start of the second period, but at 12:43, Ontario cut the Eagles’ lead to 3-2 when Sheen beat Jones from high in the right circle.  Sheen almost tied the game at 18:20 of the second stanza, but Jones bettered him this time with two right pad saves from the doorstep.  Just as Ontario had a two-man advantage bridge from the first to the second period, Colorado had one stretch from the second to the third.

Ulanski took advantage, doubling the Eagles lead with a 5-on-3 goal just 45 seconds into the third period by beating Carrozzi from the right circle.  Colorado’s power play struck again at 5:17 when Ulanski found Schneekloth in the high slot, and the defenseman’s shot was re-directed by Forney on the doorstep.

That goal turned out to be the game-winner, but before it could be announced in its entirety over the PA system, Ontario countered with a Bill Bagron goal 23 seconds later, making it 3-5.  And the Reign really made things interesting when they scored their second power-play goal of the game at 14:07 when Tristan King sent a puck into the crease that deflected off Sheen’s skate and past Jones.

But with Carrozzi pulled for an extra attacker in the final two minutes, Sides made a great play to spring Ulanski up ice with an open net and the veteran forward iced the game with 1:49 left on the clock.