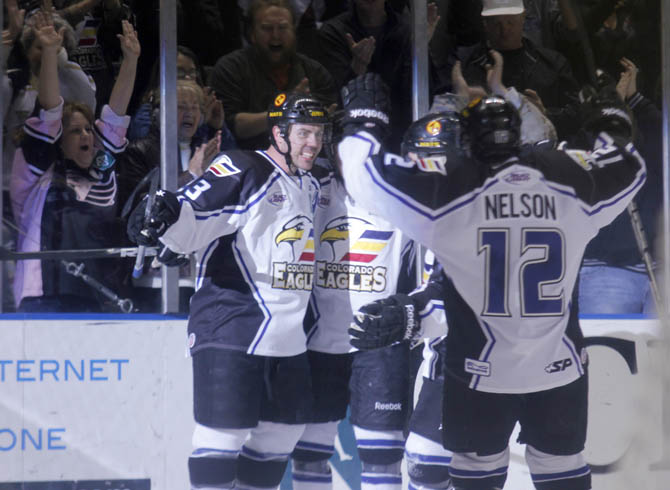 LOVELAND, Colo. -The Colorado Eagles defeated the Ontario Reign, 5-4, in overtime, winning their second of three meetings this week.  Aaron Schneekloth, the league’s leading scorer among defensemen, started the night being recognized for hitting 300 points in his Eagles career last week, and ended the game by playing hero with the overtime winner.
Each team registered 10 shots in the first period, but the Reign controlled much of the play and took a 2-0 lead into the first intermission.  Bill Bagron opened the scoring just 35 seconds into the period following a win in the right faceoff circle.  Ontario made it 2-0 a dozen minutes later, following a win in the left circle, when Alan Mazur’s shot from the point deflected off of Geoff Irwin’s leg in the slot and bounced past Kyle Jones.

Colorado came out with a better second period, out-shooting the Reign 12-6 and cutting their lead in half at 12:04.  On the play, Riley Nelson sent a lead pass from his own zone to Kyle Peto along the right wing.  The defenseman entered the offensive zone and dished a pass to Schneekloth who took a shot from the high slot.  Schneekloth’s shot fell to the ice behind Chris Carrozzi where Alex Penner was able to tap it home.

The Eagles surged into the lead with the first three goals of the third period before Ontario countered with two to force overtime.  Kevin Ulanski tied the game at 2:34 of the frame with a one-timer from atop the right circle.  Two minutes later, Joey Sides put home a loose puck from the right side of the net.  And a minute after that, Aaron Slattengren split four Reign defenders and deposited a backhander past Carrozzi to make it 4-2.

But Ontario would answer with a power-play goal in the second half of a four minute high-sticking penalty at 9:30 of the third frame when Bagron picked up his second goal of the game.  And at 14:05, Everett Sheen knocked home the tying goal following a bunch-up in front of Jones’ crease.

Carrozzi made a strong stop on Nelson in the low slot one minute into the extra session, but moments later, the Reign were called for a penalty, putting the Eagles on a 4-on-3 advantage.  Colorado would capitalize at 2:30 when Schneekloth one-timed a shot from the right circle past the Reign netminder to end the game.

The Eagles will continue their seven-game homestand with contests against the Bakersfield Condors next Thursday & Saturday.