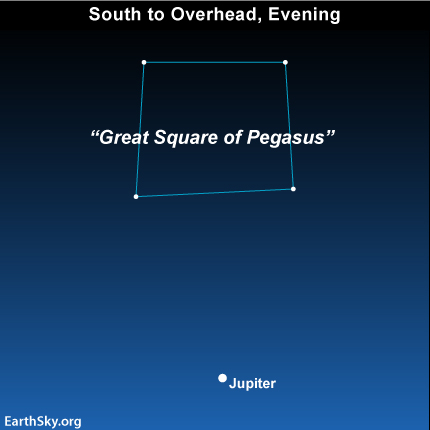 [3]Given clear skies, everyone with a decent backyard telescope should be able to view Jupiter’s moons. In their outward order from Jupiter, these four major moons are Io, Europa, Ganymede and Callisto.

First, find Jupiter with the unaided eye. That should not be too difficult because this dazzling world beams as the brightest star-like object in the evening sky. At mid-northern latitudes – like in North America, Europe and Asia – Jupiter lords over the southern sky at nightfall and early evening, sitting beneath the Great Square of Pegasus. As seen from the tropics, Jupiter appears high overhead. From mid-southern latitudes – like in southern Australia and New Zealand – Jupiter is found in the northern sky.

View Jupiter’s moons at early evening, while Jupiter is still fairly high in the sky. Jupiter sinks westward as evening deepens and sets almost due west after midnight.

Start with low power on the telescope because it is easier to get a sharper focus. Jupiter’s moons appear as pinpoints of light on nearly the same plane. Now and again, a moon might be “missing” because these moons routinely swing behind and in front of Jupiter.

Starting around 6 p.m. Central Time [5] in North America, Jupiter’s four moons appear in this order, going from east to west: Callisto, Ganymede, Io and Europa. Before that hour, Io may be too close to Jupiter’s glare to see. Callisto and Ganymede shine to the east of Jupiter, and Io and Europa to the west.

Positions of Jupiter’s moons in your sky [6]