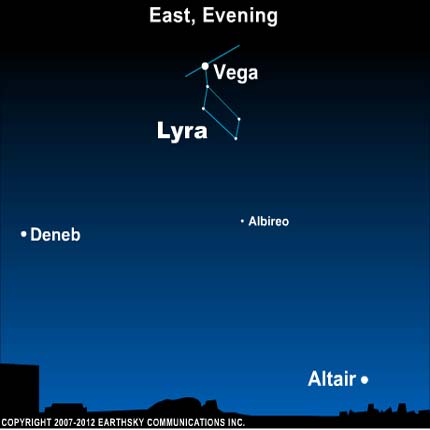 [3] Look eastward this evening, and it’s hard to miss the season’s signature star formation, called the Summer Triangle [4]. Its stars — Vega, Deneb and Altair — are the first three to light up the eastern half of sky after sunset, and their bright and sparkling radiance is even visible from light-polluted cities.

Try looking first for the most prominent star in the eastern sky, which is Vega in the constellation Lyra the Harp. Vega is blue-white in color. It’s sometimes called the Harp Star. And many people recognize its constellation, Lyra, as a triangle of stars connected to a parallelogram [5].

It’s hard to gauge the humongous size of the Summer Triangle by looking at our little chart. A 12-inch ruler, when placed at an arm’s length from your eye, spans the approximate distance from Vega to the star Altair. And an outstretched hand more or less fills the gap between Vega and Deneb.

More than any other month, July is the month of the Summer Triangle. At mid-northern latitudes, the Summer Triangle’s stars – as if a trio of school kids on vacation – stay out from dusk till dawn, dancing amidst the stars of our Milky Way galaxy. As our Earth turns tonight, Vega, Deneb and Altair travel westward across the sky. The Summer Triangle shines high overhead in the middle of the night, and sparkles in the west as the rose-colored dawn begins to color the sky.

Part 2: Deneb and its constellation Cygnus [6]

Part 3: Altair and its constellation Aquila [7]