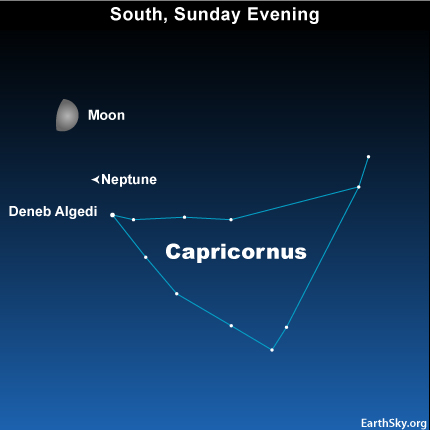 [3]Do not expect to see Neptune, even though it is close to the moon tonight. Neptune, the 8th planet out from the sun, is the only solar system planet that you absolutely cannot see with the unaided eye. Pluto is not visible to the unaided eye, either, but in 2006, this distant world was reclassified – some say demoted – to “dwarf planet” status.

Because of the moonlit glare, you probably will not even see the rather faint constellation Capricornus. Once the moon leaves the evening sky, starting in late October, Capricornus will be visible in a dark country sky beyond the first week in November.

If you are game, you can try to star-hop to Neptune on a clear, moonless night. For the next couple of months, Neptune will remain about 3 degrees from the modestly bright star Deneb Algedi.

Since a typical binocular field spans about 5 degrees, both Neptune and Deneb Algedi should be able to fit into the same binocular field together. However, Neptune demands high-quality binoculars or a telescope, patience and a detailed star chart [4]. Well into November, Uranus will be less than one-fourth degree (half the moon’s diameter) from the faint yet visible star Mu Capricorni.

Although the moon and Neptune are close together on the sky’s dome tonight, they are nowhere close in space. The moon resides about 1.35 light-seconds distant whereas Neptune is four light-hours away. That is nearly 11,000 times farther than the moon!

On this October night, use your “mind’s-eye” to envision the solar system’s most distant planet by tonight’s waxing gibbous moon [5].