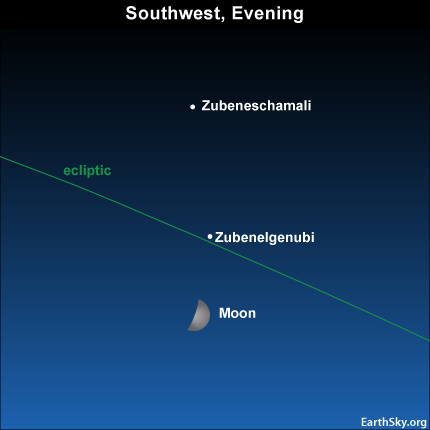 [3]The waxing crescent moon [4] and the constellation Libra’s two major stars – Zubenelgenubi and Zubeneschamali – appear rather low in your southwest sky at nightfall. The moon can help you find these stars. As evening deepens, the moon and these Libra stars descend westward, to sink beneath the southwest horizon by mid to late evening.

Zubenelgenubi has the star designation “alpha” in the constellation Libra, even though Zubeneschamali is the slightly brighter star. Zubenelgenubi sits almost exactly on the ecliptic – the sun’s annual path in front of the background stars. If you could see the stars during the daytime, you would see the sun and Zubenelgenubi in conjunction on or near November 7 every year.