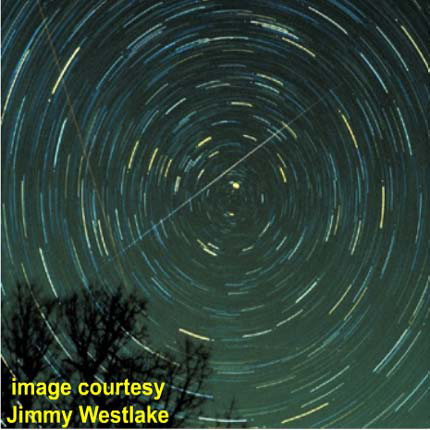 [3]Astronomy is said to be the people’s science in part because anyone, regardless of training, can participate. There is so much you can observe in the sky, even without a telescope, and of course, meteors – also called shooting stars – are high on the list.

When will the next meteor shower occur? That depends on what you mean by meteor shower. If your shower has to be a recognized and recurring event, then there are fewer than 20 major showers [4] per year, and of those, typically only two or three can be counted on for a good show.

But if you are willing to accept five or 6 meteors per hour, then the next meteor shower is tonight – or in general any night! That is about the average that can be expected for “sporadic” meteors, meaning those that are not from any known meteor shower. They are just bits of debris entering our atmosphere from space.

The best time to look for these meteors is after local mid-night and when there is no moon in the sky. (I emphasize mid-night to mean halfway between sunset and the following sunrise, which because of Daylight Saving Time and geographical conditions is not the same as clock-time midnight). You cannot predict a direction in the sky for sporadic meteors, so just find a safe dark place with a view of as much of the sky as possible, and enjoy!