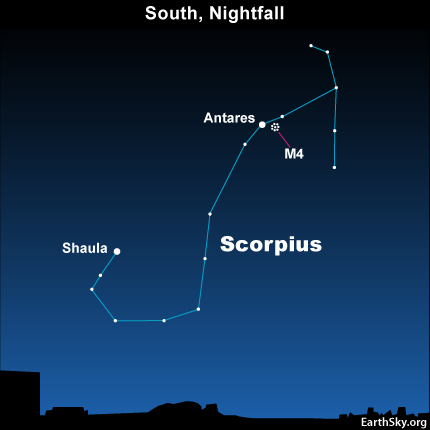 [2]At nightfall, look in your southern sky for the bright ruddy star that is called the Scorpion’s Heart – Antares, the brightest star in the constellation Scorpius. Antares is always up on summer evenings. It is a bright red star known for twinkling rapidly. If you have binoculars, sweep for an object near Antares on the sky’s dome. This object is called M4, and it’s a globular star cluster located just one degree to the west of Antares. In extremely dark skies, you can barely glimpse M4 with the eye as a hazy spot. Binoculars show it better.

Don’t have a dark sky? Then look for another bright star in Scorpius, this one in the Scorpion’s Tail. This star is called Shaula, otherwise known as The Stinger.

There are many bright stars in this direction in space. That is why Scorpius is so striking and easy to pick out. Many of these stars are known to be related to each other, siblings of sorts, born from a single cloud of gas and dust less than 20 million years ago. This collection of stars has about 100 members in all. It has centered on our constellation Scorpius and a neighboring constellation, Centaurus. The great Scorpius-Centaurus association [3] as it is called, was recognized in 1914 by an astronomer in the Netherlands.

Antares is the most massive member of the Scorpius-Centaurus association. We know that because the most massive stars evolve fastest – and only Antares has evolved already to the “red giant” stage of evolution, the beginning of old age for stars. If you look, you will easily notice Antares’ red color in contrast to other stars nearby.