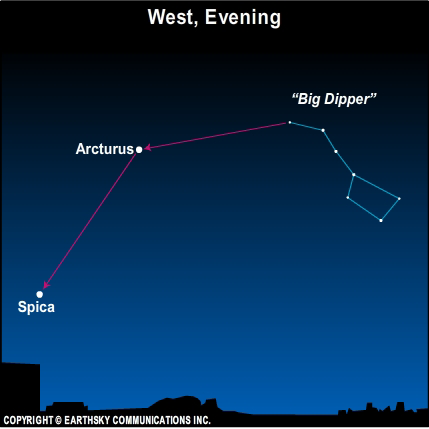 [3]The Big Dipper pops out into your northwestern sky on August evenings. On August 3, [4] we star-hopped from the Big Dipper to Polaris, the North Star. Tonight, we star-hop to two bright summer stars: Arcturus [5] and Spica [6].

As shown on our sky chart, we extend the Big Dipper handle “to arc to Arcturus and to drive a spike to Spica.” Arcturus is the brightest star in your western sky, so you cannot miss this yellow-orange beacon. Blue-white Spica, the brightest star in the constellation Virgo, is nowhere as bright as Arcturus but it is still a first-magnitude star. This blue-white gem appears to the southwest (lower left) of Arcturus.