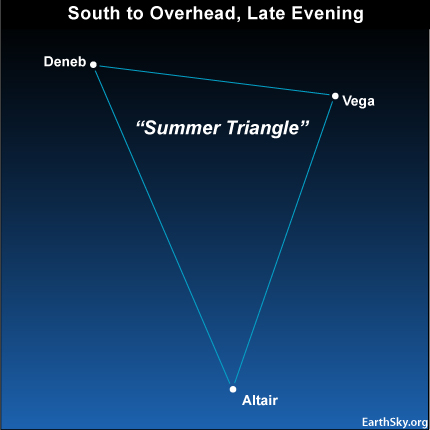 The three stars of the Summer Triangle shine so wonderfully brilliantly that you can see them from light-polluted cities or on a moonlit night. Yes, the sky will be drenched in moonlight tonight. Outside of our sky chart, tonight’s almost-full waxing gibbous moon [4] beams beneath the Summer Triangle and rather close to the horizon.

South of the equator, people see an “upside-down” version of tonight’s sky scene. At this hour, southern hemisphere residents will see the moon way high in the sky, Altair at the top of the Summer Triangle, and Vega and Altair sparkling at bottom.