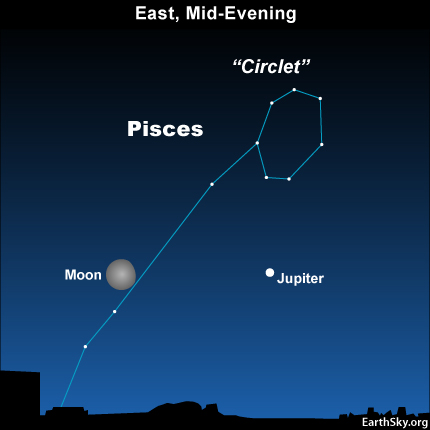 The moon is near a bright object on August 27, 2010, but – no matter what anyone tells you – that bright object is not the planet Mars. Instead, it is Jupiter.

Over the past few days, the waning gibbous moon has approached Jupiter and passed it. Tonight the moon is not as close to Jupiter as it was last night [3]. However, Jupiter is still very noticeable on August 27 as the brightest object in the moon’s vicinity.

Currently, both the moon and planet are in the constellation of Pisces the Fish. They are not far from the circular pattern of stars known as The Circlet in Pisces.

The presence of one of the brightest planets and the passage of the recently full [4] moon make this a good time to consider this general region of the sky. Pisces resides in a part of the sky that is home to other “watery” constellations, including Aquarius the Water Bearer, Cetus the Whale, Piscis Austrinus the Southern Fish and Eridanus the River. Peter Lum – in his wonderful little (out-of-print) book called The Stars in Our Heaven – wrote that Chaldean astronomers referred to this region of the sky as “The Sea.”

It is not entirely clear what these stars have to do with water. This part of the sky is relatively dark (except on nights like tonight, when the moon and king of planets are firmly ensconced in its midst). It may be that the darkness of this part of the heavens reminded the ancient stargazers of some black depth of the ocean.

In a way, there is an ocean to contemplate here, but it is an ocean of space. This part of the sky is well away from the flat disk or plane of our Milky Way galaxy, the home of every single star you can see in the sky. The greatest numbers of stars are concentrated along the plane of the Milky Way, which is the part we see in the sky as a long hazy band.

However, in the direction of Pisces –where the moon and Jupiter are tonight – there are few stars because we are looking away from the flat plane of our galaxy. Imagine that you are in a well-lit house at night, looking out a window to the darkness outside. You can see things around you in the house, but, outside, perhaps all you see are a few faint outlines. That is a bit like looking outward from our position in the Milky Way – toward the great dark universe beyond. We see many things (stars) around us in the house, but outside (beyond the Milky Way) not so many. We know that there is more out there, but it is not readily visible.

Knowing this, you may better relate to Carl Sagan’s reference to standing on the shore of the great cosmic ocean. We stand here on the star-studded beaches of the Milky Way and contemplate the largely unknown darkness beyond.