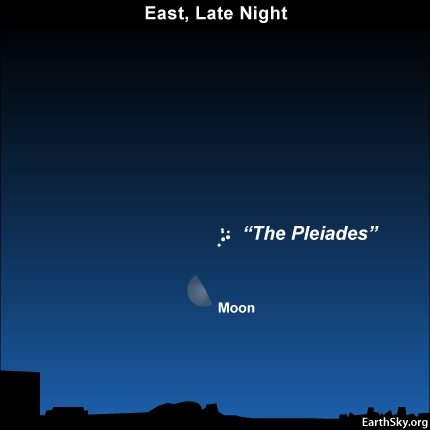 [3]The moon is not quite yet at its last quarter [4] phase as it and the Pleiades star cluster rise over your east-northeast horizon around midnight tonight. The Pleiades cluster follows the slightly waning gibbous moon [5] upward during the morning hours after midnight on Wednesday. The two luminaries shine high in the southeast as morning dawn starts to color the sky.

As seen from Madagascar, the Mauritius Islands to the east of Madagascar and the southern parts of the Indian Ocean, the moon will actually swing in front of some Pleiades stars in the wee hours after midnight tonight. The times that the moon occults – covers over – various Pleiades stars can be found at this International Occultation Timing Association (IOTA) page [6]. 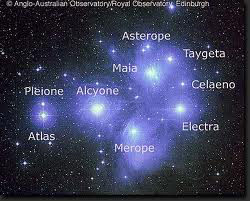 [7]
Click Image for Encyclopedia of ScienceThe Pleiades cluster is often called the Seven Sisters, though most people can only see six Pleiades stars with the unaided eye. These six little starlets create the tiny dipper-shaped formation that is well known the world over.

The Pleiades cluster consists of several hundred suns that were born from the same cloud of gas and dust over 100 million years ago. At more than 400 light-years distant, these Pleiades stars have to be quite luminous to be visible to the unaided eye. The brightest Pleiades star, Alcyone, shines some 700 to 800 times more brightly than our sun. If we include this star’s ultraviolet radiation (which the human eye can’t see), that makes Alcyone a couple thousand times brighter.

The German astronomer Johann Madler (1794-1874) popularized the idea that Alcyone is the galaxy’s central sun, until a better understanding of galactic structure rendered this notion obsolete.