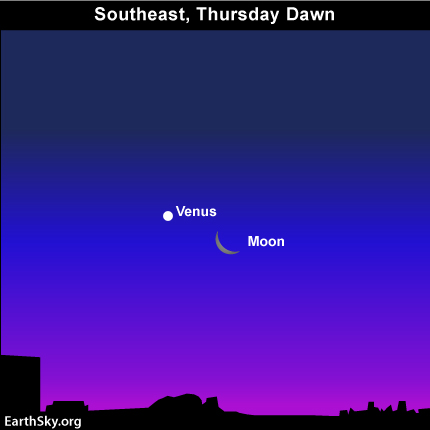 [3]On Thursday morning, December 2, 2010, the moon and planet Venus pair up in the predawn sky.

What’s more, if you look, you will find Venus shining at its maximum brightness around now as the morning star. It is always bright, but – when brightest – Venus looms as an eerie beacon in our twilight sky. It is quite a sight to see. Look eastward before dawn lights the sky.

Venus will not appear this bright in the morning sky again until July 2012. Surprisingly, Venus does not shine at its brightest when it is at full phase [4] as seen from Earth. This world shines most brilliantly when it appears as a crescent from Earth – about one-quarter illuminated. View Venus through a telescope at morning dawn to see Venus’ crescent for yourself.

At present, Venus is waxing – increasing toward the full phase – in our morning sky. We will see Venus as full when it is far across the solar system from us, so that its fully lighted hemisphere faces our direction, by August 2011. Between now and then, as Venus waxes in phase, the planet will also be moving away from Earth – too far away, in fact, to maintain maximum brilliance. Venus’ waxing phase cannot make up for its greater distance and ever-shrinking disk. Venus greatest brilliancy depends on that critical balance between the width of Venus’ phase and Venus’ distance from Earth.

Despite Venus’ variation in brightness, this blazing world always ranks as the third-brightest celestial body, after the sun and moon.

Watch Venus continue to shine exceptionally brilliantly throughout the first week of December. After the moon drops out of the morning sky in a few more days, you may even see Venus casting a shadow before dawn – especially if your landscape is covered over by snow or white sand.

By the way, in recent years, purists have begun arguing over the differences between the terms “greatest brilliancy,” “greatest illuminated extent,” and “maximum brightness” for Venus. The distinctions between them have academic interest, but – unless you are so inclined – you can ignore the distinctions. In the actual sky, you’ll see Venus about at its brightest throughout this first week of December.

In addition, make sure to watch the coupling of the moon and Venus during the dawn and predawn hours tomorrow!