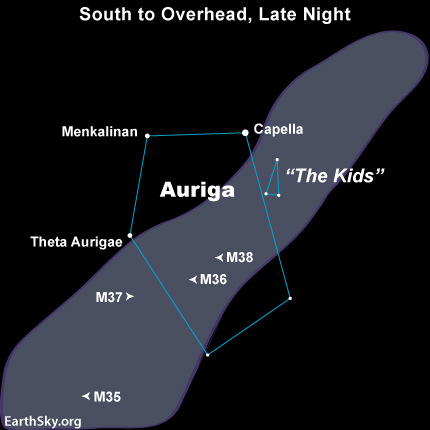 [3]On these long December nights, you can find the constellation Auriga the Charioteer. The Heavenly Chariot – with its brilliant yellow star Capella [4] – starts the journey in the northeast at dusk, flies overhead at midnight and finishes up in the northwest at dawn.

Our chart shows Auriga at around midnight, when this pentagon-shaped pattern hits the zenith, or highest point in the sky. With no moon in sight, a dark country sky brings out the pavement of stars over which the Charioteer travels: the Milky Way.

There are several easy-to-find and very famous star clusters in Auriga. With binoculars, you might be able to spot them. They are known by their “M” numbers – named for the famous astronomer Charles Messier – M35, M36, M37 and M38.

Now turn your focus to Capella, the brightest star in Auriga. According to star lore, Capella represents Amalthea, the she-goat that fed the infant Zeus when he was hidden away in a cave on Mt Ida in Crete. This was during the war between the Olympian and the Titan gods. Of course, the river of milk that spilled over from Amalthea must have formed the Milky Way!

Auriga’s stars Menkalinan and Theta Aurigae run north to south. They point northward to Polaris, the North Star, and south to Orion’s bright ruddy star Betelgeuse. With binoculars, check out the star cluster M35 between Theta Aurigae and Betelgeuse.