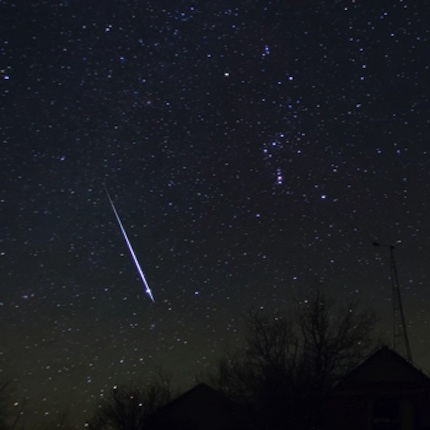 As a bonus, the moon is near Jupiter tonight. You will want to watch for the most meteors after the moon and blazing planet Jupiter set late at night.

The Geminids are a consistent and prolific shower – one of the best of the year. The shower typically produces 50 or more meteors per hour, or about one every minute, often coming in spurts with lulls in between.

Although Monday night will probably be the best for watching the Geminid meteors, the spectacle should still provide plenty of meteor activity tonight as well.

Where do the meteors come from? Although meteors are sometimes called ’shooting stars,’ they have nothing to do with stars. Instead, they are strictly a solar system phenomenon. Around this time every year, our planet Earth crosses the orbital path of a mysterious object called 3200 Phaethon, which might be an asteroid or a burnt-out comet orbiting our sun. Debris from this object burns up in the Earth’s upper atmosphere to give us the annual Geminid meteor shower. The moderately fast Geminids slice through the Earth’s atmosphere at some 35 kilometers – or 22 miles – per second.

How high up are meteors when they begin to glow? [5] 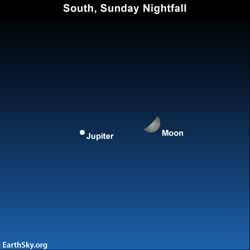 [6]The Geminid meteors are named for the constellation Gemini the Twins, which contains their radiant point [4].

However, you don’t need to know the constellation Gemini to see the meteor shower. The Geminid meteors will streak across all parts of the heavens from late night until dawn. Find a dark sky to watch this seasonal attraction, for the Geminid shower is sure to add to the holiday lighting these next few nights.

Remember, tonight might be good – tomorrow night might be better – for the Geminid meteors. The Geminids are one of the few meteor showers that are good to watch in the evening as well as after midnight, but in 2010, the moon is in the way during the evening hours. Expect the meteors to increase in number in number after the moon and Jupiter set in late evening. Give yourself at least an hour of viewing time under a dark, open sky for the 2010 Geminid meteor shower.