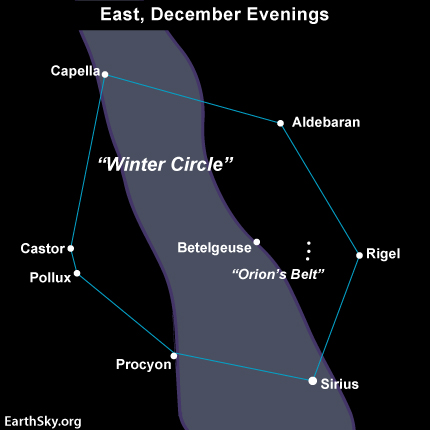 [3]You will have to stay up until 9 or 10 p.m. tonight to see the exceptionally brilliant and huge Winter Circle filling up the eastern portion of sky. This famous sky pattern is not a constellation. It is an asterism: a noticeable pattern on the sky’s dome. In this case, the pattern is made of the brightest stars of winter, in many different constellations.

From a dark sky, you will see the Milky Way’s hazy band of stars passing right through the Winter Circle.

The southernmost and brightest star of the Winter Circle is Sirius. It will be the last to rise tonight. Look for dazzling Sirius to sparkle wildly over the southeast horizon around 9 to 10 p.m. tonight.

This year, the brightest stars of winter appear less brilliant, because there is an even-brighter planet nearby. This planet is Jupiter, by far the brightest star-like object in the evening sky now. Jupiter is up earlier than the Winter Circle stars. You will find it shining due south in our sky around 6:30 p.m. local time.

Be sure to note where Jupiter resides relative to the horizon at early evening. This giant world will move westward as evening deepens, to set fairly close to due west after midnight.