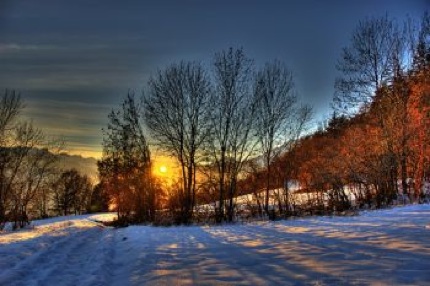 [3]The 2010 solstice comes on December 21, but the earliest sunsets for the northern hemisphere are around now.

It seems paradoxical. At middle latitudes in the U.S. – and throughout the northern hemisphere – the earliest sunsets [4] of the year come about two weeks before the solstice and the shortest day of the year.

Why isn’t the earliest sunset on the year’s shortest day? It is because of the discrepancy between the clock and the sun. A clock ticks off exactly 24 hours from one noon to the next. However, the actual days – as measured by the spin of the Earth, from what is called one “solar noon” to the next – rarely equals 24 hours exactly.

Solar noon is also called simply “midday.” It refers to that instant when the sun reaches its highest point for the day. At this time of year, the period from one solar noon to the next is actually half a minute longer than 24 hours. Today, the sun reaches its noontime position at 11:52 a.m. local standard time. Two weeks from now – on the winter solstice – the sun will reach its noontime position at 11:59 a.m. that is 7 minutes later than today.

The above image is from jayhem’s [6] photostream.

As you might have guessed, the latest sunrises and sunsets are not on the day of the solstice either.

The earliest and latest sunsets and sunrises are lovely phenomena that happen around every solstice. People around the world notice them and often ask about them.