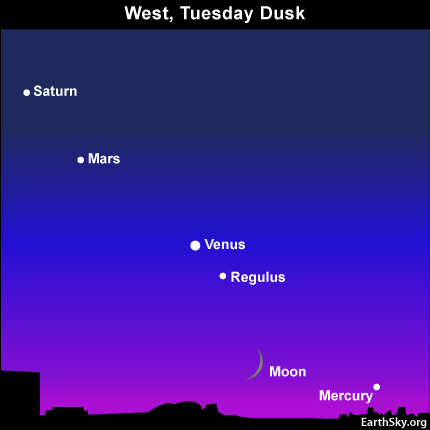 [3]Our sky chart shows the sky for mid-northern North American latitudes at about 45 minutes after sunset [4]. If you have a level horizon and crystal-clear skies, you might catch the thin waxing crescent moon [5] and the planet Mercury next to the horizon. Mercury sets about one hour after the sun and the moon sets about one hour and 15 minutes after. So, they’ll be hard to catch in the twilight glare. Try binoculars!

The three other evening planets will be much easier to spot. From top to bottom, these worlds are Saturn, Mars and Venus. Venus, by far the brightest of the bunch, sets roughly 2 hours after sunset (at mid-northern latitudes). Ruddy Mars sets nearly 3 hours after the sun, and golden-colored Saturn sets more than 3 hours afterwards. South of the equator, these worlds stay up later after dark.

Saturn and Mars are called superior planets because their orbits lie outside of Earth’s orbit. Saturn, the farthest world that you can easily see with the unaided eye, ranks as the 6th planet outward from the sun. Mars, the next planet outward from Earth, ranks 4th. Earth stands as number 3.

Venus and Mercury are called inferior planets because their orbits lie inside of Earth’s orbit. Venus, the planet one step inward from Earth, lodges at number 2. Mercury is the solar system’s innermost planet, explaining why this world is so often obscured in the sun’s glare.

Jupiter, the 5th planet outward, now shines as the brightest star-like object in the dawn and predawn sky.