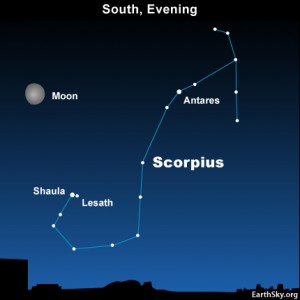 [3]If you can see Antares and the moon – and if your sky is unobstructed in the direction toward the southern horizon – you might be able to pick out a graceful looping stream of stars, despite the moonlit glare. These stars represent the Scorpion’s curved Tail. They are the reason Scorpius has been identified as a Scorpion by stargazers.

After the moon drops out of the sky in late July and early August, look at the Scorpion in all his starlit majesty! In a dark country sky, you will have no trouble seeing the Scorpion’s J-shaped loop of stars and the two stinger stars, Shaula and Lesath.