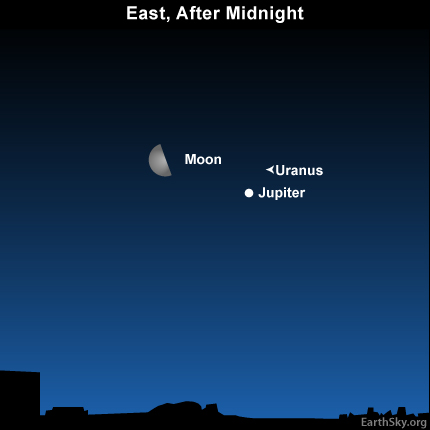 [3]The darkness between midnight and dawn belongs to the last-quarter [4] moon and Jupiter. They appear in the east as today becomes tomorrow, and steadily climb into the sky.

Jupiter is the solar system’s largest planet, more massive than all the other planets, moons, and other debris combined. And we are lucky to have it. Astronomers believe that its gravitational presence has kept Earth safe by sending asteroids and comets out of the solar system. A few still got through (sorry, dinosaurs!), but the impact history of Earth was not as bad as it could have been.

If you do not stay up late, nor get out of bed before sunup, but still wish to see Jupiter and offer it thanks, just wait a few months. Jupiter is just beginning its season of evening visibility that will last through the end of the year. Day by day, the King of Planets will rise earlier and earlier. Come September, it will rise as the sun sets. At this point, Jupiter will be at “opposition,” when it will lie directly opposite the sun in the sky and thus be visible all night. In a quirk of celestial clockwork, just when Jupiter reaches opposition, so will the planet Uranus. In fact, the two giant planets will appear less than 1 degree apart.