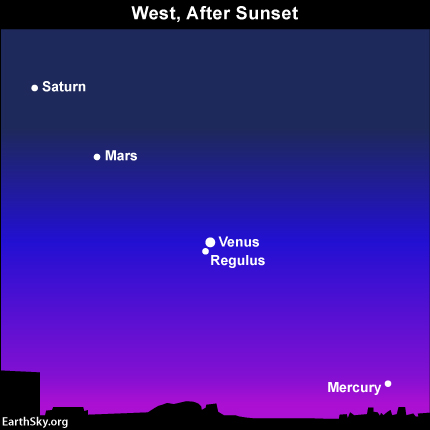 [3]The dazzling planet Venus and the star Regulus [4] are in conjunction at 9 p.m. Central Daylight Time [5] this evening. That means they are north and south of one another on the sky’s dome, with a small gap separating the two.

This evening, Venus and Regulus shine about the same distance apart as the width of your little finger, held at arm’s length. Although Regulus is a very bright star, it pales next to Venus, which is the third-brightest heavenly body after the sun and moon.

Objects on the sky’s dome do sometimes get so close at conjunction that one passes in front of the other. It would have to be Venus, in this case, passing in front of Regulus – since Regulus is vastly more distant than Venus. An occultation is a special type of conjunction in which the closer object passes in front of the more distant object. The last time that Venus occulted Regulus was on July 7, 1959. The next time will not be until October 1, 2044.

Four of the five visible planets appear in the July 2010 evening sky. Mercury will be tough to catch, however, because this world sets [6] less than one hour after the sun. Mercury will be better placed for viewing later in July.

Jupiter can be found in the July morning sky. You must stay up until midnight or later to watch the king planet rise in the east, or get up before daybreak to see Jupiter at its highest point in the sky. During the dawn and predawn hours, Jupiter beams as the brightest point of light in the morning sky.