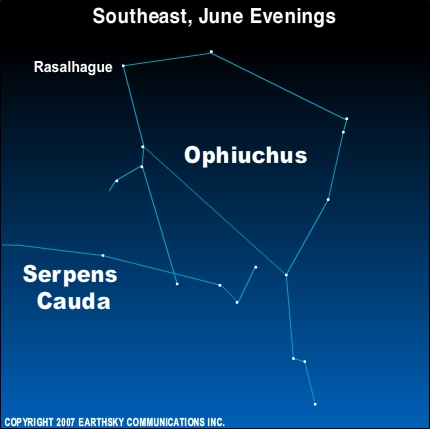 Hopefully, you will have a dark, country sky for today’s view. If so, you might catch a glimpse of the constellation Ophiuchus the Serpent Bearer. Its head is marked by the star Rasalhague.

Ophiuchus is joined in legend and in the sky to the constellation of the Serpent, called Serpens. This is one constellation that looks to me like what it is supposed to: a big guy holding a snake. The constellation is identified with Aesculapius, said to have been the first doctor, who learned his trade from a snake. It is this same tradition that causes a staff with a serpent around it to appear in doctors’ offices and hospitals today.

It is said that Aesculapius was such a powerful healer that he succeeded in raising the dead. This act angered Pluto, god of the underworld. To make peace among the gods, Zeus transported Aesculapius (Ophiuchus) to the night sky.

Ophiuchus is the constellation that astrologers forgot. The sun lies within its boundaries for about two weeks each year, from November 30 to December 18. Many people are born between these dates, of course, yet no one ever claims to be “an Ophiuchus.”

Astronomy Picture of the Day from NASA/JPL [2]