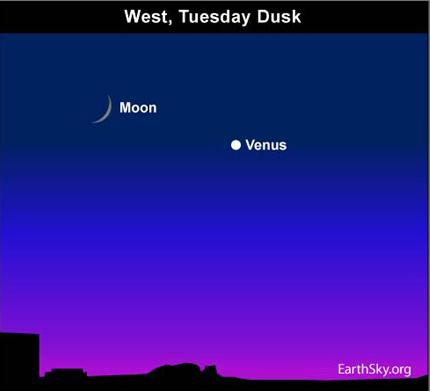 Our chart shows the sky scene for mid-northern latitudes in North America. Depending on where you live worldwide, Venus may appear closer or farther from tonight’s waxing crescent moon [2], or may even appear below the moon. But no matter. Nighttime’s two brightest heavenly bodies bask away in the west as darkness falls around the world.

These two bathing beauties shine by reflecting sunlight. Over time, both worlds exhibit the full range of phases, though you need a telescope to observe the changing phases of Venus.

Because the moon and Venus are globes, they are always half-illuminated by sunlight and half-obscured in their own shadows. The portion of the daytime and nighttime sides that we see depends on how these worlds are oriented relative to the Earth and sun.

This evening, we see a rather small part the moon’s daytime side and a good portion of its nighttime side. That is because the moon resides fairly close to the sun/Earth line, and is sitting pretty much between the Earth and sun.

Venus, on the other hand, is about 75% illuminated by sunlight and 25% in shadow. That is because this world sits fairly close to the Earth/sun line, too, except that Venus lies much farther away. It is on the other side of the sun!