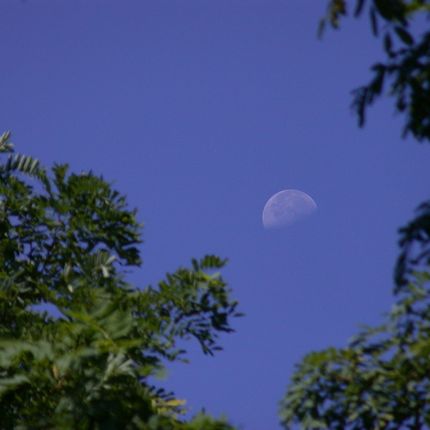 [2]Full moon was two days ago. That means the moon is now in a waning gibbous [3] phase, rising late at night and setting in a westward direction after sunrise. That means you can look in the southwest sky after sunrise tomorrow to see the moon in a clear blue daytime sky. Each day this week you can see the daytime moon in the morning sky. If you look for the moon at the same time every morning, you will see that the moon climbs higher and higher up into the sky all week long.

People love to see the daytime moon. They wonder about it, and ask about it. Once, a reader in Kansas City wrote in with the name ‘children’s moon’ to describe a moon visible during the day. She said this name stemmed from the idea that children cannot stay up at night late enough to see the moon, when it appears only in darkness.

That story prompted another reader to send in an alternate version for the origin of the name children’s moon. She wrote, “I heard a daytime moon was called a ‘children’s moon’ because their eyes were sharp enough to pick it out, where the old folks, with fading vision, could not tell it from the clouds.”

Can you see the daytime moon this week? In the morning, look for it low in the southwest sky tomorrow, and rather high up in the southern sky about a week from now.