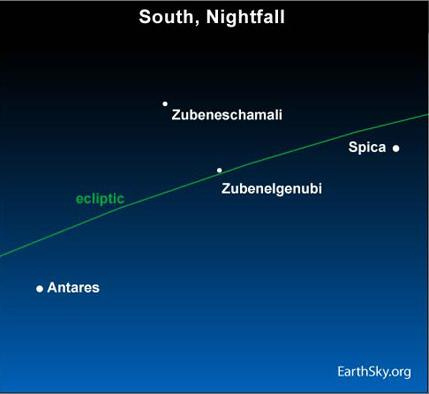 [3]Before moonlight floods the nighttime at late night tonight, see if you can spot the constellation Libra’s two visible yet modestly bright stars: Zubenelgenubi and Zubeneschamali. If you live at mid-northern latitudes – like in North America, Europe and Asia – you will see these Libra stars rather low in your southern sky at nightfall and early evening. As seen from middle latitudes in the southern hemisphere – like in Australia – the Libra stars sit close to overhead at early to mid evening.

Look for Zubenelgenubi midway between Antares and Spica. Meanwhile, Zubeneschamali lies about one fist-width from Zubenelgenubi. Hold your fist an arm length away.

Antares [4], Zubenelgenubi [5] and Spica [6] are called zodiacal stars, because they reside so close to the ecliptic. The ecliptic marks the sun’s annual pathway in front of the backdrop stars. If you could see the stars during the daytime, you would see the sun pairing up with Spica in middle October, Zubenelgenubi on or near November 7 and Antares on or near December 1.