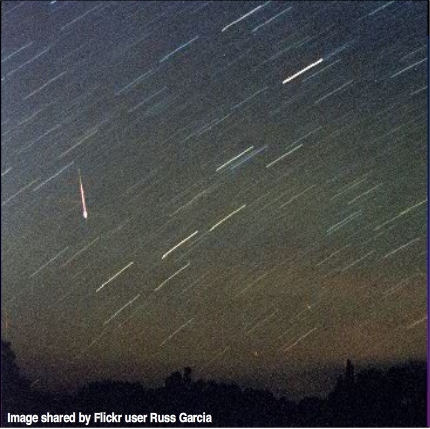 [3]We get lots of questions about meteor showers. Kathlen in the Bronx wrote, “When is the next meteor shower going to happen?” Gayatri in Oceanside, California wrote, “I have never seen a shooting star. I want to see one. Is there any event happening? How should I find one?”

Kathlen, Gayatri, and everyone else who longs to see a “shooting star” or meteor streaking across a clear night sky . . . it is possible to see a meteor any night of the year. There are lots of minor meteor showers [4], and “random” meteors appearing in our skies that are not associated with any shower. However, it is true that you will have the best chance to see meteors on nights when a major meteor shower reaches its peak.

In most years, the next best time to begin watching for summer meteors is in late July, when the Delta Aquarid meteor shower is rambling along steadily. . .and this year is no exception. The Perseid meteor shower generally overlaps with the Delta Aquarids. The Perseids will begin rising to a peak in early August, with the peak itself coming on the morning of August 12.

Want more about meteors? You will find a listing of the year’s major meteor showers in this article: EarthSky’s meteor shower guide [5].