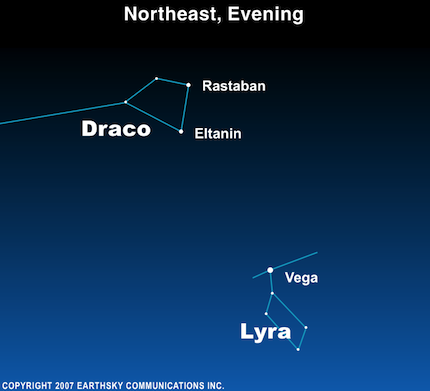 One of you asked, “What are constellations?”

The answer is that they are just patterns of stars on the sky’s dome. The Greeks and Romans, for example, named them for their gods and goddesses, and for many sorts of animals. In the 20th century, the International Astronomical Union (IAU) formalized the names and boundaries of the constellations. Now every star in the sky belongs to one or another constellation.

The stars within constellations are not connected, except in the mind’s eye of stargazers. The stars in general lie at vastly different distances from Earth. It is by finding juxtaposed patterns on the sky’s dome that you will come to know the constellations.

For example, for years, I have glanced up in the north and spied the two stars marked on today’s chart, Rastaban and Eltanin in the constellation Draco. They are noticeable because they are relatively bright and so near each other. In addition, there is always that split-second when I ask myself with some excitement what two stars are those? It is then that my eyes drift to blue-white Vega nearby . . . and I know, by Vega’s nearness, that they are Rastaban and Eltanin in the Dragon’s Head.

In other words, Vega is always near these stars because the stars stay fixed relative to each other. Vega, by the way, lodges at the apex of the Summer Triangle [2].

To see all of Draco, go back to yesterday’s chart [3].