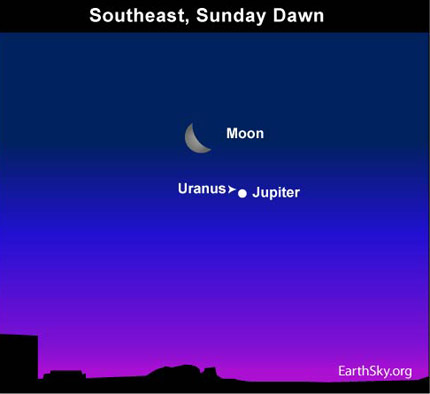 Before daybreak tomorrow (Sunday, June 6), the two most brilliant heavenly bodies of the early morning sky – the waning crescent moon [2] and the dazzling planet Jupiter – couple up together to light up the dawn and predawn hours. The moon and Jupiter showcase themselves all over the world, except at far northern latitudes near and north of the Arctic Circle. That far north, the June sun shines for 24 hours, or nearly 24 hours, a day.

Our chart displays the sky scene as viewed from mid-northern latitudes in North America. Elsewhere, the moon and Jupiter may be positioned differently, but it hardly matters. Given clear skies, you can’t miss these shining beauties. The moon and Jupiter beam in your east or southeast sky in the wee morning hours before sunrise [3].

If you are more of a night owl than an early bird, you can watch the moon and Jupiter rising in the east a few hours after midnight. For the precise rising time of the moon and Jupiter, check out the links on our almanac page [3]. These times presume a level horizon.

Identify Jupiter, the 5th planet outward from the sun, and then use binoculars to spot Uranus, the 7th planet outward, on some dark night. Uranus and Jupiter snuggle up within the same binocular field all through 2010.