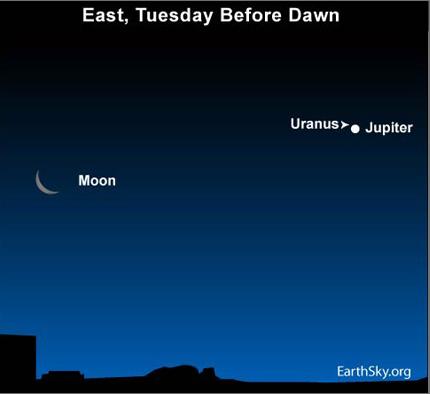 The closest planet/planet pairing takes place in the morning sky on Tuesday, June 8. Jupiter and Uranus stand less than 1/2 degree apart. (For reference, the moon’s diameter spans 1/2 degree of sky.)

The brighter of these two planets, Jupiter, beams as the brightest celestial point of light in the dawn and predawn sky. Uranus, though, only appears about 1/2000 as bright as Jupiter. In other words, you will need a dark sky and binoculars to see Uranus. You will have to get up before dawn tomorrow to see the two worlds in the same binocular field together.

Astronomy Picture of the Day from NASA/JPL [2]