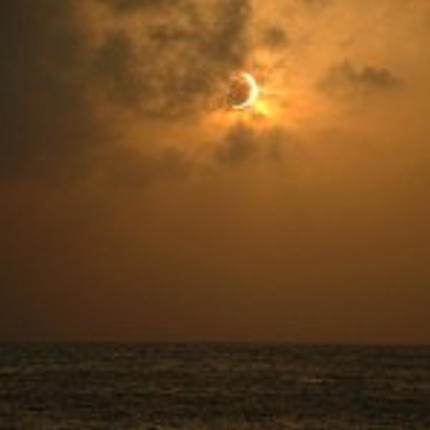 [3]A total eclipse of the sun takes place today [4], but not in the United States. To see it – one of nature’s grandest spectacles – you must be located along today’s long yet narrow total eclipse path that stretches across the South Pacific.

People ask when a total solar eclipse will be visible in the mainland United States. It won’t happen until August 21, 2017. The next total eclipse after that for U.S. observers will be on April 8, 2024. Here’s a map [6] that shows all the total solar eclipses occurring in North America from 2001-2050, thanks to the eclipse master Fred Espenak [7].

During a total solar eclipse – whenever the new moon [8] swings directly in front of the sun and completely covers it – the sky turns suddenly from day into night, and stars and planets pop into view. What’s more, a total solar eclipse shows you the sun’s normally invisible corona [9]. It’s a breathtaking sight!

The moon passes more or less between the Earth and sun every month. This is the new moon [10] phase. More often than not, no eclipse happens at new moon, because the new moon usually sweeps to the north or to the south of the sun. There are several lunar and solar eclipses each year, however, and the next solar eclipse (for non-U.S. observers) will come on January 4, 2011.   Are lunar eclipses more common than solar eclipses? [11]

[12]The above photo of the solar eclipse at sunset is from JunCtion’s [13] photostream.

Astronomy Picture of the Day from NASA/JPL [15]