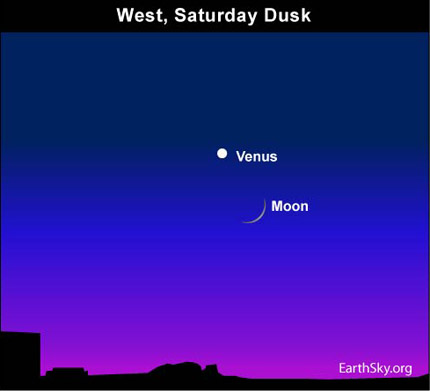 [3]Sharp-eyed observers with clear skies and a good view of the western sky may catch a thin lunar crescent a few degrees to the lower right of Venus this evening. Best views will be about a half hour to an hour after local sunset. Face the west-northwestern horizon. If the sky is clear and you have an unhampered view, Venus will be un-missable! The thin crescent moon [4] is below and to the right.

Because the moon and planets share a similar apparent path in the sky, it is not unusual for the moon to appear to pass close to Venus. In fact, the moon appears somewhere near it about once a month. However, most people don’t see these events because they are visible in the evening sky only half the time and then only for a short period after sunset. The other half occurs shortly before dawn, which obviously cuts down the number of people who are outside observing! The apparent closeness varies from month to month as well.

As seen from North America, the moon and Venus will be 8-10 lunar diameters apart, about half the width of your fist held at arm’s length. At other times —or other places —, passages can be much closer!

While this event will be a wonderful sight, the real fun comes some hours later, unfortunately long after moonset for those of us in North America and Europe. At about 10 hours Universal Time [5] on Sunday (that’s 5 a.m. EDT), the moon appears closest to Venus. Neither will be visible from North America at the time. In some places, from North Africa to Indonesia, the moon appears to pass less than its own diameter away from Venus. This means that the moon will pass directly in front of and occult (eclipse) the planet. Most locations in the occultation’s ground path will be in full daylight, but from some locations — in particular from Sumatra to the Philippines — the occultation occurs after sunset. There, the moon will completely hide Venus for a short while. Just before the occultation, Venus will appear so close to the Moon that it could well be mistaken as being inside the crescent. It may well have been a glorious sight such as this that inspired the crescent moon and star symbol that has come to represent the faith of Islam. However, do not expect to see the “star” (Venus at least in this case) really inside the crescent, which is impossible. Being farther from Earth than is the Moon (currently more than 500 times farther), it is not possible for Venus to shine through the solid body of the moon.

Although the rest of the world will miss the spectacular sight seen from maritime Southeast Asia, the moon will still be close to Venus Sunday night, but above it and slightly to the left. A similar close passage between the moon and Venus, perhaps even better for North Americans, will occur again in June. However, we will not experience an occultation of Venus until August 13, 2012, and that will be before dawn.