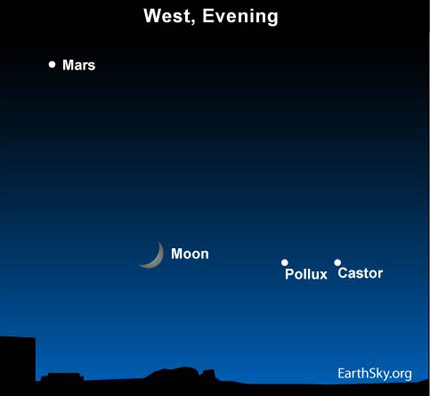 [3]At nightfall, the waxing crescent moon [4] lines up with Castor and Pollux, the two brightest stars in the constellation Gemini the Twins.

People often refer to these stars as ‘The Twins’ but they aren’t really twins at all. At a distance of about 34 light-years [5], Pollux wins acclaim as the closest giant star to our solar system. It’s one of the very few giant stars in our galaxy known to harbor a planet.

Castor is farther away, at 52 light-years. It looks like a single star to the eye, but it’s actually six stars in one, all revolving around one another in an intricate dance.

With binoculars, you may discern Castor and Pollux’s contrasting colors [6]. Pollux looks orange whereas Castor appears white. An orange star has a relatively low surface temperature, indicating that Pollux [7] is in the autumn of its years. On the other hand, a more youthful star – like Castor [8] – displays a white color, a sure sign of this star’s higher surface temperature.

Last but hardly least, look for the ruddy planet Mars to the upper left of the moon. The moon will haved move much closer to Mars by this time tomorrow [9] night.