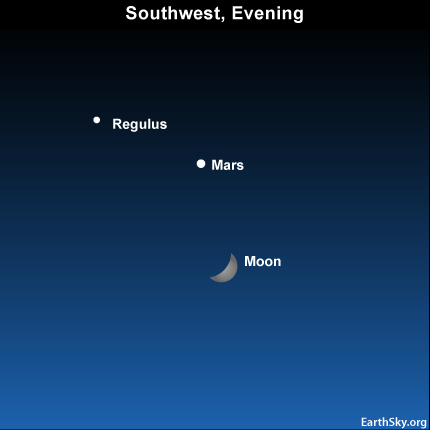 [3]This evening, the rather fat waxing crescent moon [4] sits fairly close to the ruddy planet Mars. Yesterday [5] evening, a somewhat thinner lunar crescent shone closer to the Gemini stars, Castor and Pollux. Tomorrow [6] evening, the first quarter moon [7] will shine more closely to Regulus, the brightest star in the constellation Leo the Lion.

The moon, always in motion, continually goes eastward in font of the background stars. It goes full circle (360 degrees) relative to the stars every 27 and 1/3 days. That’s about 13 degrees eastward daily. For reference, your fist held at an arm length approximates 10 degrees.

Mars, the 4th planet out from the sun, has two moons of its own. Unlike Earth’s large moon (diameter: 2160 miles), Mars’ two potato-shaped moons – Phobos and Deimos – are extremely tiny. Lengthwise, Phobos and Deimos measure about 17 miles and 10 miles, respectively.

Like Earth’s moon, these moons go eastward around their parent planet, though at a much faster pace. Phobos, the inner moon, orbits Mars in 7.6 hours, whereas Deimos, the outer moon, takes about 1.3 days. In contrast, our moon’s orbital period spans some 27.322 days.

Phobos and Deimos are little rocky worlds that may have been captured from the asteroid belt [8].